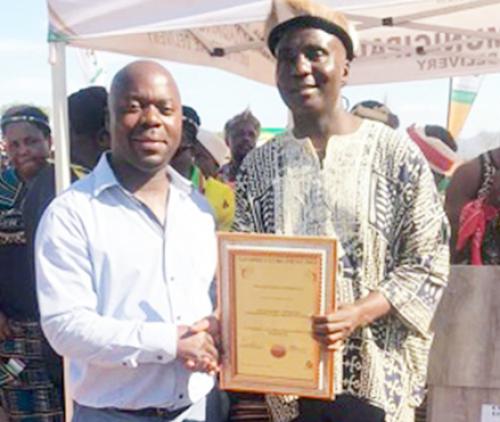 Magaisa honoured for his outstanding contribution

A local author and a resident of Tiyani village, Themba Patrick Magaisa, was honoured for his outstanding contribution in the promotion of his cultural heritage and the Xitsonga language during the Hlanganani Cultural and Heritage Forum recently held at the New Born Football Grounds in Ka-Bungeni.

During the event, which was aimed at honouring legends of culture and heritage, Magaisa said that he felt grateful for being honoured. "It is an amazing feeling to be recognized. It is very rare and difficult that a person gets acknowledged, appreciated and given a credit by his or her own community.”

Magaisa has previously won the South African Poetry Award from the South African Literary Awards and the Order of Ikhamanga. He said young people must be proud of their language. "Language is very important, because we are nothing without it. It is our pride, it is our communication tool and also our identity," Magaisa said.

He has taken it upon himself to invest his efforts in developing indigenous literature. His focus is mainly within the Xitsonga language, and he has authored several novels and poems in the language. "My novels and poems have been taught in many public schools where Xitsonga is offered. I have also played a role in the development of Xitsonga learning and teaching support materials for the new curriculum," he said.

According to him, if the indigenous languages are not given adequate recognition, at least at the same level as English, they run the risk of extinction. "It is often emphasised that indigenous languages should be taught from the early stage of education right into the senior phase. My literary work has made it easier for the government to provide study materials for the teaching of indigenous languages," he said.

Those interested in his literary work can phone him on 083 827 3709 or visit Guyo bookshops. He is also available on Facebook under TP Magaisa.