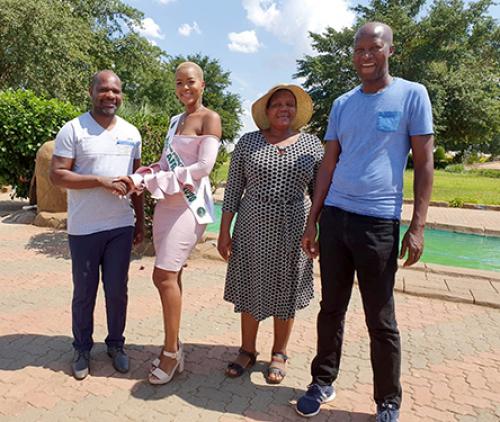 The new Miss Africa is Kenya’s Irene Ng’endo, with Miss Angola, Daniela Lopes, being crowned as the first runner-up. Irene’s prizes included $35 000 and an all-expenses-paid trip to Malaysia.

The Maimela family were elated with their daughter’s achievement and paid a courtesy visit early this year to the Matsila Royal Family where a large group of people joined in the celebrations.

Chief Livhuwani Matsila hailed the achievement by Maimela as the best example of how young women from rural areas can perform if given the necessary support by their parents and communities. Matsila further congratulated Tondani's parents, Mr Milton and Mrs Polinah Maimela, for grooming their daughter and raising her with the discipline and character required to achieve excellence in life.

The young beauty queen made a passionate plea to chief Matsila to assist with her dream to contribute towards socio-economic development of the youth in rural areas. For this purpose, she has established her own NGO, Eunoia SA, that will focus on education and business development opportunities for young people. Chief Matsila accepted a proposal for her NGO to be mentored by the Matsila Community Development Trust, so that Tondani can fulfil her dreams.

Tondani’s father, Mr Milton Maimela, was overjoyed by the chief's commitment to support and guide his daughter. “I have no words to express my happiness that my daughter will finally get professional support in order to realise her ambition of becoming the next Miss South Africa,” he said.

Tondani is now firmly on a journey to contest for the Miss SA 2020 pageant. In order to qualify for nominations, Tondani is expected to build up a portfolio of charitable work done in poor communities.