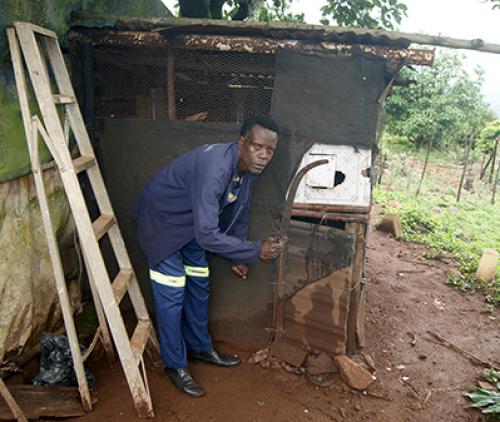 Mr Edward Makhari hacked a python with a machete.

An encounter with a python that arrived at night to steal some chickens and pigeons left a Maelula family both shocked and frustrated. All their pleas for assistance to catch and relocate the snake were in vain and eventually they had to hurt the snake to scare it off.

The incident happened last Monday (13th) at the mountain-top home of the Makhari family. The 57-year-old Mr Edward Makhari explained that he was awakened at about 21:40 by the sound of a knock on his door. It was his son, Avoid Makhari, who had come to inform him that noises were coming from inside the chicken coop.

“He told me that the chickens were making a hysterical noise, and I immediately went to investigate. When I arrived there, I found that everything was in order,” Edward Makhari said. “I went back to bed.”

However, at 23:30 the noise started again, and this time the sound was of the maddened frenzy of chickens scurrying in the coop and bashing into the steel sheet walls.

“My son and I went out to check on the chickens. I used my phone torch to check around the coop through the mesh from outside and saw a huge python pinning down one of the chickens,” he said. “It had already covered the chicken with its thick, slippery saliva, ready to devour it. I kicked the coop so hard that the python left the chicken and started slithering about the coop, with chickens and pigeons fluttering around in fear.”

Makhari then called the police at Siloam, who instructed him to contact the Makhado police for assistance. “The Makhado police said there was nothing they could do, and that left me flabbergasted and frustrated,” he said. “I kept calling different police stations and individuals seeking help. My pigeons and chickens were in danger, and I didn't want to harm the python. I wanted professionals to deal with the matter. But just opening the door for the python to move out only meant that it could come back whenever it wanted or swallow one of our children in the village,” he said.

The desperate Makhari then used a machete and hacked the snake. The python managed to escape out of the coop through a small hole, leaving behind his chicken meal, but they caught it and put it in an empty water drum.

When Limpopo Mirror visited the Makhari family the following morning, Makhari and some residents were combing the bushes, searching for the injured python. It had managed to sneak out of the water drum. “I thought it had died because I had pierced it with a spear when it was slipping out of the chicken coop,” Makhari said.

He made a plea for the police always to answer to residents' calls and make themselves available. “If the police had come to keep watch with me, while they tried to contact the relevant bodies to come to the rescue, my three pigeons, chicken and the python would not have died.”

The python that kept Mr Edward Makhari and his son awake all his night.