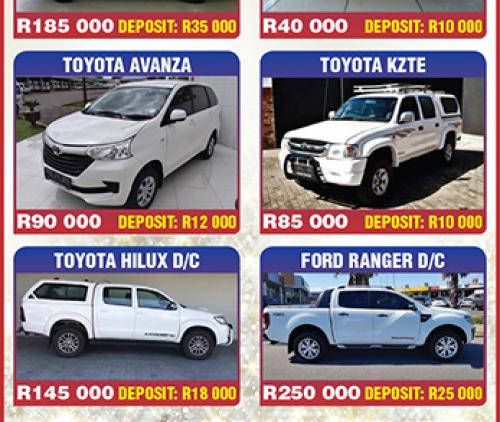 One of the adverts used to lure unsuspecting buyers. The criminals appeared to have used the name of a Gauteng-based car dealer to add legitimacy to their operations.

A charge of fraud or theft is being investigated by the SAPS against motor dealers or individuals, purportedly from Gauteng, who advertise vehicles but, once money has been deposited, disappear.

Early in January this year, a person, introducing himself as Keith Mayor, the sales manager of Southgate Wheels from Ridgeway, Johannesburg, placed two small adverts in the Limpopo Mirror. Mayor (which is probably not his real name) advertised deals on passenger vehicles and minibus taxis at fairly cheap prices.

Prior to accepting the adverts, the newspaper asked Mayor to forward documentation as proof that he represented a registered motor dealer. The necessary documentation was then sent, with the address supplied as 1 Totius Street, Ridgeway, Gauteng. The certification of registration as a second-hand goods dealer was also forwarded, which indicates that the owner of the company is a Mr Mervin Govender.

Last week, the newspaper was contacted by irate customers who had responded to the adverts. One of the customers, who did not want his name mentioned, described how he had contacted them, stating that he was interested in a 2006 Toyota RunX that had been advertised for R40 000.

The “salesperson” was quick to respond, even sending him an AA report indicating that the vehicle was in excellent condition with only 121 000 kilometres on the odometer. He was asked to sign the pro-forma invoice and make a payment of R41 800, which included the R1 800 fee to deliver the vehicle to his address in Thohoyandou.

On the date of delivery, however, no-one arrived. Frantic phone calls to the dealer went unanswered. He could not get hold of the “sellers” at any of the numbers supplied. Suspecting that he may have been conned, he went to the bank to stop the payment, only to be told that the account had been “emptied” from an ATM in Richard’s Bay that morning. The bank was unable to reverse the transaction, he was told.

A case of fraud was reported at the Thohoyandou police on Friday and is being investigated.

In a second case, a client received a pro-forma invoice for a 2015 Toyota Quantum 3.00D for R185 000. This time, however, the potential buyer verified the account with the bank, only to find out that it was registered in the name of an unrelated young man. These “ghost” accounts are probably created and emptied once a deposit is made.

Phone calls from the newspaper’s office to the numbers provided on the advert remained unanswered.

On Wednesday, Limpopo Mirror spoke to the owner of Southgate Wheels, Mr Mervin Pillay, who was very upset about the manner in which such scams are executed in the name of reputable vehicle dealers. He emphasized that Southgate Wheels had nothing to do with these transactions and had no knowledge of the adverts. “We don’t use local newspapers in our marketing strategy,” he said.

Pillay said that he had checked the names and the numbers provided in the adverts and none of these matched that of any of his staff members. Even the company registration number used and the logo are not the same as that of Southgate Wheels, he pointed out. “After carefully viewing all of the information forwarded, I can categorically state that all of the documents submitted to the client are fake and were not from Southgate Wheels,” he said.

Pillay said that they would assist the law-enforcement agencies to try and catch these criminals.