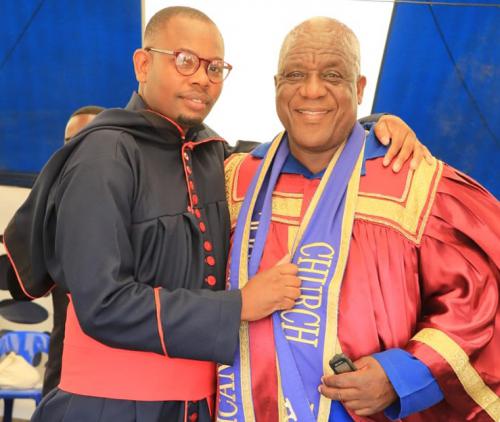 A young advocate who aspires to be a judge one day says the church should not only cater for the spiritual needs of the congregants but should also cater for their physical well-being on earth.

Adv Ndiyorabela Dolby Gadabeni (34) said this shortly after his inauguration as bishop of the Jesus Apostolic Church in Sabbath. The event was held at Rangani village, near Malale.

The church was founded by Ndiyorabela’s father and veteran of the Christian faith, Archbishop Tsevheli William Gadabeni, in 2017. The congregation already has six branches around Vhembe and in Lephalale.

Probably one of the youngest bishops in the country, Gadabeni, who hails from Tshipise Tsha Sagole in the Niani area, said he was humbled to have been bestowed such a great responsibility by the church. “As a bishop, my responsibilities include the overall administration of the church, performing religious rituals, administrating Holy Communion and playing an oversight role over the priests and everyone who does some work at the church. This is a very huge responsibility, but I will face it head-on because I know that the Lord that I serve will guide me to perform my duties diligently.”

He said his immediate plan was to establish additional six branches before the end of this year. “As a young man, I still have a lot of energy and I will use it to grow this church. Together with my church board, we are also looking at establishing branches in neighbouring countries such as Zimbabwe, Mozambique and Botswana. We will definitely achieve this by the grace of our Lord Jesus Christ.”

The legal eagle, who is also the founder and president of the non-profit organization, Friends of Ubuntu, said besides serving the Lord and his busy legal commitments, he also found time to develop his community. “I urge other men of the cloth not to concentrate on the Gospel only, but to follow suit and assist in developing the communities they serve. I founded the Friends of Ubuntu while I was a law student at the University of Venda in 2009.”

So far, the organization has assisted hundreds of students with placements at various institutions of higher learning and to get bursaries. “It is our responsibility as messengers of Christ to play a meaningful role to assist those who are less privileged on this beautiful earth that the Lord has given us,” he said.