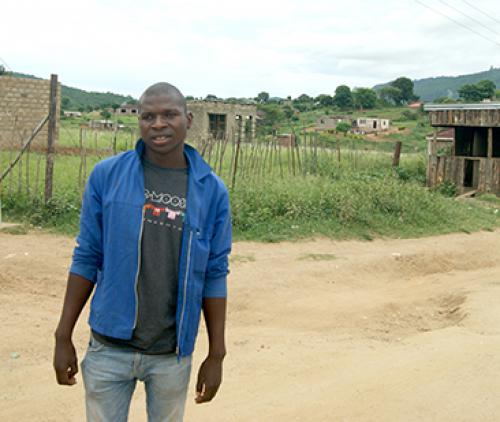 Manase Matamela is disgruntled because a neighbour is claiming a large portion of his stand (behind him).

A 27-year-old resident of Mbhokota village, Manase Matamela, is disgruntled because a neighbour is claiming a large portion of his stand.

According to Matamela, the land (which can be halved into two or more stands) had all along belonged to his late father with one fence and a stand number, as is normally the case in the rural areas. However, a neighbour, Johannes Dlomu (Chabalala), had erected a market stall on one the side of the stand, along the gravel main road, despite the old man's refusal for him to do so.

“That was many years ago. I was still very young, but I remember that my father and Chabalala had engaged in a bitter war of words, because he had even started selling alcohol and his clients would throw their bottles and cans over the fence into our yard,” Manase said.

He added that at one stage his father had reported the matter to the police and a case was heard in the Hlanganani Magistrate’s Court held in Waterval, and the neighbour was instructed to stop interfering with the old man’s life.

Now the case is on again at the Nkhensani Traditional Council between Chabalala and Manase, and the Council is yet to make a final ruling on who the rightful owner of the stand is.

Manase feels that Chabalala is taking advantage of the fact that his father had passed away, and now Chabalala would like to misuse the office of the Council to swindle the portion of his land out of his name.

“If it is true that the stand has belonged to him since 1998, as he claims, why did he wait for over 24 years while we had fenced it and were staying on it?” he said. “Chabalala will have to answer to that before the Council; he mustn’t try and take us for a ride. We were born onto this land and our father left it for us.”

Meanwhile, Chabalala said that the space in contention had been empty and wild when he had made an application to the Council in 1998 to use it. He said that he was subsequently granted a permission-to-occupy (PTO) letter.

“After I was given the PTO, old Matamela saw me and the Council official on that piece of land and he knew from that that I was given it, so within a few days he had fenced it off together with his original stand to make it one big yard,” Chabalala said. “When I approached the old man, he was so fierce that even my mother feared for my life and advised me to stay out of the matter. She said I would get killed, and I took her word for it and suspended the stand issue.”

Chabalala had apparently continued to run his fruit market and spaza shop right along the old man's fence. “The old man [Matamela] lodged a complaint at the magistrate's court that I had made a spaza shop in the space where he was running his car wash, but the court official wrote a letter saying that the space belonged to me,” Chabalala said.

When Matamela passed away in 2016, Chabalala felt that it was the right time to claim his stand back. “Even the council knows that the stand belongs to me,” he said.

The council's chairperson, Mr James Mgavini, confirmed that the case between Manase and Chabalala would resume in the Nkhensani Traditional Council's court on Tuesday next week. “We are working towards finding all evidence, so that we finally arrive at a fair and satisfactory ruling in this case,” he said.