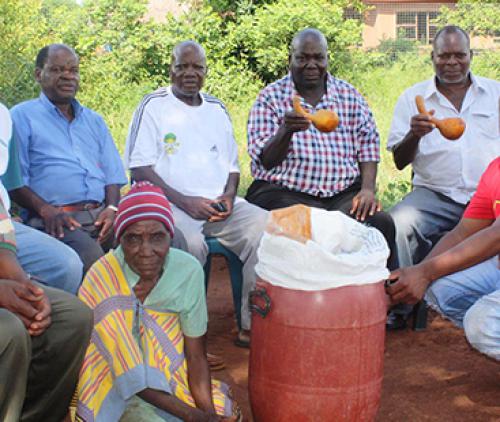 With the beginning of the mukumbi/marula/vukanyi season, the rural village of Malamangwa-Tshamutavha near Ha-Matsika outside Thohoyandou organised and celebrated the so-called muhwedzo wa u luma mukumbi (tasting of the first fruit) or ku luma vukanyi ceremony last Saturday.

Mr Makoko Radzilani (72), who also brewed the beer, said that during the beginning of the season, mukumbi/marula beer must first be tasted by the traditional leader, with the villagers allowing marula beer makers the opportunity to brew and sell to the drinkers.

According to Radzilani, although women were known for brewing mukumbi, he had surpassed them with more than 30 years’ experience of brewing the beer and had never sold it. During the season, he brews it and calls the traditional leader of the area with community members to drink it freely, pleasing his ancestors.

He said the marula fruit ripened between January and March each year and collecting them to make beer was an age-old tradition where the mukoma of each village informed the mukumbi makers, who were mostly women, to collect the fruits and start making beer.

Mashige said he was excited about drinking mukumbi for the first time during this year and hoped that 2020 would bring some blessings for him, because he had pleased his ancestors.

One of the women who brew marula beer, Ms  Makhadzi Mudzuli, said that it took three to four days for the marula beer to ready to be consumed and urged rural women to start collecting the fruits, so that they could empower themselves economically by selling the beer.