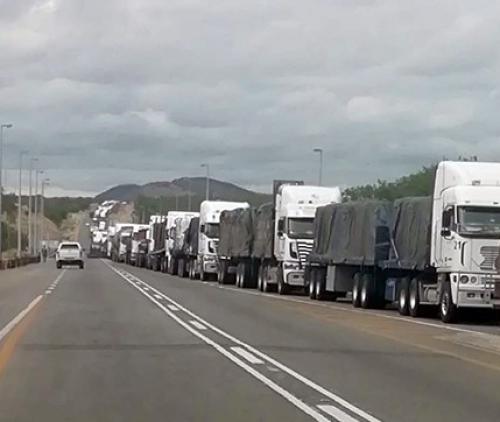 Already tired of lockdown? It could be worse. You could be stuck at the Beitbridge Border Post with nowhere to go. This is currently the scene at the border post. Although trucks transporting essential good can pass through, many foreign travellers were refused exiting South Africa when the border post closed at midnight.

Residents from neighbouring countries were left stranded at the Beitbridge border post since midnight on Thursday, 26 March, when the lockdown regulations came into effect and the border closed.

President Cyril Ramaphosa announced the drastic measures to try and curb the COVID-19 pandemic on Monday night. It was later announced that Zimbabwe and South Africa will jointly close the Beitbridge border post, with non-SA residents being allowed to travel north and South Africans allowed to enter from the south. It was reported that cargo operations will not be interrupted.

Late on Thursday night, travellers to countries such as Zimbabwe, Malawi and the DRC were anxiously waiting their turn to cross the border. Since earlier the week the traffic volumes on the N1 north increased dramatically, with thousands of travellers heading north back to their homes.

One such traveller, Ms Sandra Manyere who stays in Zimbabwe, said that she arrived at the border post at about 22:00. She said that they realised that they are stuck, because there were no movement back to Musina. Car and minibus-taxis were queuing, blocking all the lanes, preventing vehicles coming from the north to pass.

Manyere said that the officers at the border post knocked off at midnight, in accordance to the President’s instructions that a lockdown will be implemented. On Friday morning they were still waiting at the border, not knowing what will happen. There was no movement and no-one could tell them what lies ahead.

“We are requesting the President to allow us to go home. We have no place where we can go,” Manyere pleaded.

Questions about the situation were sent to the Limpopo police’s spokesperson, Col Moatshe Ngoepe. He requested that written questions be sent to him and promised to respond later.