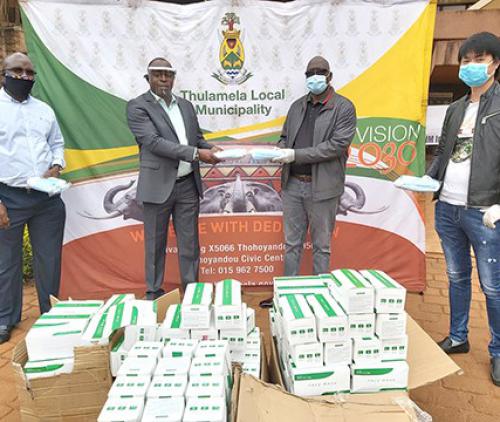 Another state-of-the-art mall for Vhembe?

The number of unemployed people in Vhembe will soon decrease, thanks to a state-of-the-art mall to be built at Lwamondo village outside Thohoyandou.

The mall will be built on a seven-hectare piece of land situated between 15 SAI and Zwikwengani, Lwamondo Mvelaphanda, just after the bridge on the right-hand side.

The mall will be built by Lim Investment, a company led by a well-known local businessman, Gen Abel Nelwamondo, and his two Chinese partners, Yi Xing Weng and Qi Gui Zhuang.

In his exclusive interview with Limpopo Mirror during the handing over of 10 000 masks to Thulamela Mayor Avhashoni Tshifhango on Tuesday morning at the main entrance of the municipal offices, Nelwamondo said the mall would be built as soon as the lockdown period was over.

He said the mall would cover 30 000 square meters and use local companies in the construction.
About 3 000 local people will also get job opportunities during the first phase and the second phase of the project. “In the first phase, we will have 60 shops. After that, we will build another 40 shops, which will be the final phase of the project that will also include enough parking,” said Nelwamondo.

He added that they had decided to build the complex after realizing that Thohoyandou was struggling to cope with the high volume of people who shopped there. The new complex, which is still to be given a name, will have all banks, cellular companies, supermarkets and almost all shops that are in Thohoyandou and will cater for people from Vuwani, Tshakhuma, Tshisaulu and other areas.

The former SANDF member, who was Defence Attaché representing South Africa in China before he retired, said they decided to donate 10 000 masks as another way of helping the government to fight against the spread of the coronavirus.