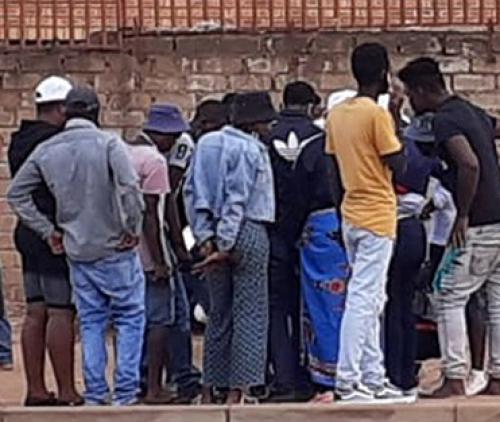 People crowding on a pavement in Thohoyandou where the conmen are plying their trade.

While the country is gripped by the scourge of Covid-19 and working hard towards finding relief and the solution to the coronavirus pandemic, three-cards conmen are unashamedly practising their con craft in the public spaces in Thohoyandou.

This game, which has been a popular game played for decades that had vanished in the early millennium in most parts of the province, seems to be a favourite tool used by local swindlers to con people out of hundreds of rands, even now amid the hard times of Covid-19.

Right in the glaring open space after the busy Thavhani Mall traffic signs, the three-card hosts continue to occupy the space beside the busy pavement, luring unsuspecting passers-by to come over and win thousands of rands.

“No-one wins, it’s a scam,” whispered a passer-by, when asked why she was passing and not stepping forth to come and play. “They are crooks. They are our own children; they have teamed up with foreigners to scam, and you must know that, once our children team up with foreigners to do crime, we are no longer safe.”

The conmen, along with some female accomplices, were speaking a variety of languages, which included Sepedi, Tshivenda, and isiNdebele. “Win-win now! Good cash for you and your children. Come one – come all,” hailed one of the conmen, flashing lots of banknotes for everyone to see.

Some people around were not wearing masks, and no social distancing was being practised.

“As a country, we are trying by all means possible to fight the scourge of Covid-19 by taking preventative measures, but with people like three-cards men, it seems we are losing the battle,” said one man when asked about his take on the crowded group of conmen and their unsuspecting victims. “

Three cards is a game where the host uses either three playing cards or three bottle caps. In the case of cards, the host mixes the cards and the player will choose one card. With bottle caps, a small stone is placed under one cap before the caps are swirled around, making it difficult for the “player” to keep track of where the stone is.

One of the cons involves placing a bit of chewing gum or any other small sticky matter under one of the caps, which the stone sticks to. The con artists are normally skilled, with a variety of tricks enabling them to remove or switch the stone.

Even if the player were to choose a cap of which they are 100% sure that it contains the stone or paper ball, they would still find nothing inside it, because the con-artist has manoeuvred it and has it stuck either in his nail or on the back part of his palm.

In the 1990s, this game was illegal and many people who hosted it were arrested, prosecuted, and given jail terms. Ever since that era, no three-card hosts were seen in any of the towns or cities, luring people into playing.

While the host and his team were manning the spot, at least two young men were keeping an eye out for the police at three different vantage points on the traffic signs, so that each time they sighted anything suspicious, they would rush to the spot to report to the host, who would then double-check the prospects of danger (the police).

Provincial police spokesperson Brig Motlafela Mojapelo condemned the game of three cards and warned those involved in the gambling to stop doing so. “Three cards is an illegal (form of) gambling which mainly aims to blind those who are lured to play it, so that they think that they are going to win a fortune, only to get conned of their hard-earned monies,” Mojapelo said. “People should learn that there’s no free money in this world; they need to stop getting enticed to play the three cards and use that money to get some food and clothes for their children instead.”

He made a public call for people to notify the police the moment they see conmen hosting the three-card scam in town.