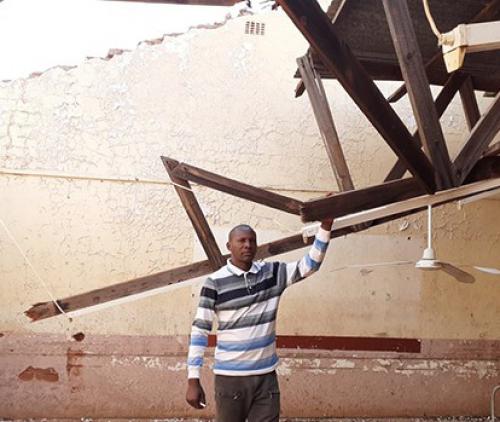 No classrooms for Maphophe pupils

The government is currently finalising the back-to-school-in-phases programme for pupils after the schools were all shut down, following the announcement of the lockdown about two months ago.

Things might be harder for the pupils of Maphophe Primary School in Maphophe village, situated some 7km outside Saselamani town in the Collins Chabane Local Municipality.

The school boasted five blocks, of which two were damaged in a rainstorm about two years ago, and two more are just old and not habitable or conducive to being used to accommodate pupils during lessons. The last block has five classrooms, but only three are used for pupils while one is a stationery storeroom.

According to the chairperson of the school-governing body, Mr Gezani Chauke, at least two mobile classrooms were delivered to the school, but the parents’ feeling was that the department should consider employing long-term measures for the school.

“We need proper classrooms,” he said. “It is winter now and the children have got to get back into the dilapidated classrooms, which are just like cold-rooms. The old blocks of classrooms are in a condition that they cannot be fixed because they are too old and shaky.”

Limpopo Department of Education’s spokesperson, Ms Tidimalo Chuene, admitted that the current school’s infrastructure was not in a good state but added that the department had provided nine mobile classrooms in the 2019/20 financial year as a means of replacing the damaged blocks of classrooms and to add more teaching and learning space.

“The school management, with the SGB, accepted only two mobile [classrooms] citing [a] lack of space on school site, vegetation and other sentimental futures (sic) that need not to be tampered with,” she said. “The remaining seven [mobile classrooms] were distributed to two nearby schools.”

However, Chuene said, the department was currently exploring the idea of demolishing two or three classrooms that were inferiorly built with less structural integrity to make way for temporary replacements in the form of mobile classrooms. “The school will be listed on [the] priority list of schools that need urgent attention according to educational norms and standards,” she concluded.

Meanwhile, school-management teams across the province should have reported to schools on Monday (11 May), and educators were set to do so on 18 May, but then the department circulated a communique for school-management teams not to report to schools because “reopening of schools is dependent on a number of strict Covid-19-related conditions and protocols, which are yet to be succinctly (sic) met by the department at all levels of operation.”