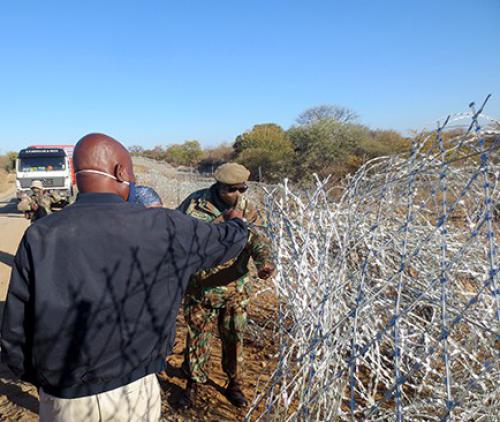 On the western side of the newly constructed fence the damage is clearly visible. Photo: Bernard Chiguvare.

The newly built R37 million fence next to the Beitbridge border post is still marred by controversy. During a visit by the Limpopo MEC for Transport last week, the damage to the fence was clearly visible, as were the shacks erected to house illegal border crossers. The matter was also debated in parliament last week, with the director-general of public works being grilled by members of parliament.

The purpose of the visit was to gain first-hand experience of the situation at the border post, as well as to inspect the 40km stretch of fence. She also wanted to get a sense of the illegal activities said to be continuing along the border, which include the importation of cigarettes.

The team drove 20km from the port of entry to the west where they discovered that the newly erected fence had been damaged. As they drove to the east of the border post, several gaping holes in the fence were visible. Footpaths leading into South Africa were visible, indicating that these are routes used to enter the country illegally. At some places, poles had been put up against the fence that could be used as bridges across the fence.

At an area known as Gate 2, several shacks were found. According to the SAPS, the area is used as a temporary shelter by border crossers. The shacks serve as temporary shelter for the illegal immigrants and the goods that they bring across the border.

A few hours before the visit, members of the SANDF, SAPS and immigration officials arrested eight people at Gate 2 and on the west side of the border fence. The arrested people apparently had no proper documentation.

Lerule-Ramakhanya urged the district and local municipalities to continue working together with law enforcement on site to ensure that operations around the border were successful.

The issue of the Beitbridge security fence was fiercely debated in parliament last week. On Wednesday, the director-general of public works and infrastructure, Sam Vukela, told parliament that his department was satisfied that the fence was serving its purpose. His statements contradicted those of his minister, Patricia de Lille, who previously told the same parliamentary committee that they were receiving daily reports of vandalism and theft at the fence. De Lille also said that her department had been advised by its internal anti-corruption unit not to pay any more money to the contractor, but to wait until the investigations had been completed. She said that only R21 million of the R37 million had been paid over to the contractor.

De Lille told members of parliament that the auditor-general had been asked to investigate the project. One of the issues raised by members of parliament was why a contract had been awarded to a company that had seemingly failed to deliver a proper service before. The question was also asked whether the department had received the full value of the R37million awarded.

“That is exactly one of the issues that I have asked the auditor-general to investigate. What is the current market rate of fences, who are the suppliers and all of that? The investigation will determine whether we got value for money,” said De Lille. She told parliament that one of the reasons mentioned why the fence cost so much was because of the terrain.

De Lille said that the responsibility to protect the fence lay with the Department of Defence. Defence minister Nosiviwe Mapisa-Nqakula had previously deployed extra patrols along the border, which included a helicopter and motorbikes.