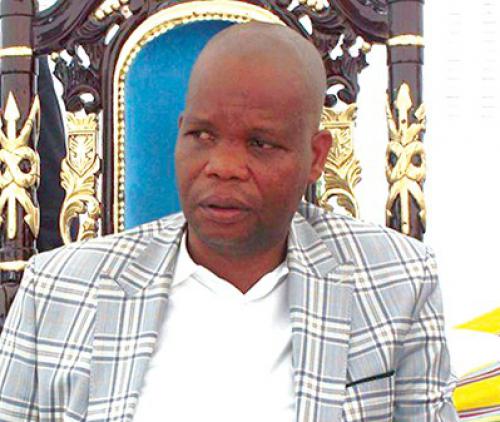 “Tell me what I owe VBS”

Khosikhulu Vho-Toni Mphephu Ramabulana will have no problem settling any legitimate VBS Mutual Bank debt he may have, but he needs to be properly informed of the details of the money he is supposed to owe.

Earlier this week, the acting Vhavenda king’s spokesperson, advocate Makonde Mathivha, confirmed once again that Ramabulana has always been willing to co-operate with the investigators and the liquidators of the bank. He said that they had written to the liquidators more than a year ago. “We yet have to get the response, or at least an acknowledgement of the letter written to those in charge of the VBS issues/challenges,” he said.

In October 2018, advocate Terry Motau, assisted by Werksmans Attorneys, released a report entitled “The Great Bank Heist”. The report was commissioned by the SA Reserve Bank to investigate how VBS Mutual Bank had been plundered. The report contained damning evidence against several people who worked at the bank or who took part in the looting. Last week, eight of the prime suspects were apprehended and seven of them subsequently appeared in the Palm Ridge Magistrate’s Court.

Among the 53 “people of interest” mentioned in the Motau report, is Toni Mphephu Ramabulana. He allegedly benefited to the tune of tens of millions of rands that flowed to his accounts or those of people and organisations associated with him. The exact amount that the Vhavenda traditional leader is supposed to have received, is not clear. What is not clear either is whether he received the money directly or whether his status and name were merely used by unscrupulous people involved in the looting.

“To the best of my knowledge, no amount of R17 million was paid to me‚ gratuitous or otherwise‚” Ramabulana stated in an open letter on 14 October 2018. “Most significantly‚ the (Motau) report does not find that I was part of any criminal enterprise. The report describes the payment as a gratuitous payment,” the letter reads.

Ramabulana then explains that, in his capacity of king of the Vhavenda people, he receives various grants, including financial support from various individuals and entities. “Any such receipts I deem them to be legitimate, untainted, and bona fide support to the responsibilities I hold in relation to Vhavenda people.” He then absolves himself from blame and states that, should he have received payments flowing from fraudulent or criminal activities, “I would have received (such) without knowledge of the criminal wrongdoing which the report identifies”.

“I irrevocably offer to repay any amount which will be shown to have been proceeds of the illegalities in the report as soon as they are computed and am directed where the payment must be made and the terms of such repayments,” he says.

How did the Vhavenda leader become involved in VBS?

To answer this question, one must go back to 2013. Up to that stage, VBS Mutual Bank was a small financial institution, holding deposits made by hundreds of stokvels and other small investors, predominantly from the former Venda homeland. “The PIC, which had succeeded the pension fund of the Venda bantustan government, held a substantial shareholding in VBS,” the Motau report reads.

The mutual bank then became the target of what some former employees of the bank describe as a hostile takeover. The central character in this episode is Tshifhiwa Matodzi, who later became the chairperson of the VBS Board of Directors. The Motau report describes how Matodzi approached Ramabulana’s advisor at the time, attorney Paul Makhavhu. The plan was then set in motion to acquire a controlling stake in the mutual bank.

Makhavhu told the investigators that this led to the establishment of Dyambeu Investments (Pty) Ltd, which was owned by Matodzi’s company, Brilliant Telecommunications (Pty) Ltd, Promafco (Pty) Ltd owned by David Mabilu and the Vhavenda Trust ("Vhavenda") representing the Venda royal family. Mabilu is a politically well-connected property tycoon and lately owner of media enterprises such as the Sunday World newspaper.

The Vhavenda Trust held 51% of the shares in Dyambeu, with Brilliantel and Promafco each holding 24.5%. Dyambeu Investments then purchased 26% of VBS for R6 million. This effectively meant that Dyambeu Investments, with the support of the individual PIC members, could control the bank.

What became clear quickly was that the new team at the helm had a different vision for the bank. From primarily receiving deposits from small investors and lending money to local people, the bank set its target on a multitude of small entrepreneurs vying to supply government institutions or municipalities with goods or services.

In the 2015 annual report of VBS, the bank’s CEO, Andile Ramavhunga, explains the three main products that the bank would focus on, namely fuel guarantees, bridging finance/contract finance and invoice discounting. He also explains the new funding model of the bank. “Due to the limited savings that are available from the general public, the bank changed its strategy of sourcing deposits and funding. A focus was placed on sourcing funding from institutions and municipalities.”

What also becomes clear from this report is that the bank will rely on the contacts and goodwill of its shareholders. In the report, Ramavhunga refers to the PIC’s capital injection and the role that Toni Mphephu started playing: “During the current financial year, we concluded a revolving facility of R350 million from PIC (major shareholder). This facility is aimed at financing fuel and energy-related transactions. Cash holdings increased by 54% in the current financial year, mainly due to marketing collaborations and interventions of His Majesty the King through Dyambeu investments.”

The bank’s new direction clearly relied on contacts, and for this they needed figures such as Ramabulana, and they needed to rope in the services of politically well-connected people. Whether a person like Toni Mphephu Ramabulana was always aware of what was happening, is debatable.

In the Motau report, Paul Makhavhu is quoted as saying “the people in the royal family are clueless as far as business is concerned”. According to him, the royal family did not have “a single cent”. Even the R6 million Dyambeu Investments paid for the shares in VBS was paid by Brilliantel and Promafco.

Where did things go wrong?

The strategy of VBS’s new leadership quickly seemed to pay dividends. In the 2016 financial year, the bank recorded a R4,9 million profit. “Total assets of the bank have increased to R1 billion (156%) when compared to the prior year. Since the turnaround strategy started, the assets have increased by 209%,” Ramavhunga states in the 2016 report. He mentions that R280 million was raised from municipalities.

But the cracks started appearing, especially when VBS entered the international spotlight for lending R7,3 million to former President Jacob Zuma, seemingly with no guarantees required. The timing was also suspicious, especially with Zuma announcing not long before that that Toni Ramabulana would be inducted as new king of the Vhavenda. (The coronation ceremony was halted, following an urgent interdict brought by Masindi Clementine Mphephu, his niece.)

Early in 2017, a “new player” also entered the scene, namely the Vele Group. The VBS Board was swayed to accept an R80 million offer from Vele for eight million shares, representing a 53% shareholding. As the Motau report points out, even this was a swindle, as the money was never paid to VBS but muddled in a series of artificial suspense accounts.

The Motau report describes in a fair amount of detail how the looting of the bank then progressed. The bank’s control measures were relaxed and eventually ended up in transactions’ only being noted in spreadsheets. The bank’s head office activities were moved to Johannesburg, away from the Makhado office. Officials at municipalities and politicians received kickbacks and “commission” to channel deposits to VBS. The deposits, however, were not used in the manner they were supposed to. According to the Motau report, “The captors and their associates went on a massive spending spree at the expense of VBS’s depositors.”

While the looting continued, the VBS management and directors did their best to hide the facts. False information was sent to the banks’ “policeman”, the Registrar of Banks. “These frauds misled the Registrar into believing that VBS was in a financially sound position whereas, in truth, its liabilities exceeded its assets by about R180 million and it was, thus, hopelessly insolvent as at 31 March 2017.”

Who shared in the spoils?

Speculation as to who might have received what is rife. In June last year, the City Press newspaper alleged in an article that Ramabulana, along with the bank’s former chairperson, Tshifhiwa Matodzi, and the former chief executive of Vele Investments, Robert Madzonga, had allegedly dipped into hundreds of millions of rands belonging to depositors to finance their lavish lifestyles.

Ramabulana allegedly received a monthly salary of R310 000 from Vele, which was deposited into his VBS account. “The bank also financed the king’s five cars, worth more than R6,5m in total, including a top-of-the-range Mercedes-Benz Viano worth R1,6m and a R1,4m Range Rover,” the article states.

At the time, Ramabulana threatened to open a case of fraud and corruption against Madzonga and Matodzi. The Sunday Times reported that Ramabulana believed that his name was used to secure money from VBS Mutual Bank, which in turn was used to finance the luxury items. He sent a lawyer’s letter to Vele Investments, demanding it settle the R11 million debt used to buy the luxury cars and house.

The Motau report links Ramabulana and the royal family to more than R40 million in unpaid debt or illegal benefits obtained from VBS. “People like Magula, Nesane, Ramikosi, Makhavhu and the Venda king were seduced by the vast amounts of money that were strewn about by VBS and Vele. They were paid handsomely for their influence and their silence,” the report reads.

Did the acting Vhavenda king share in the spoils of criminal activities? The Motau report clearly believes this: “Indeed, it emerges very clearly that VBS and Vele have been operated as a single criminal enterprise, with Matodzi firmly at the helm”.

The report mentions Toni Mphephu Ramabulana as having received R17 729 758. The report also mentions that “TP Mphephu, the Venda king, received R8 million”. Whether this is an additional amount remains uncertain.

People close to the acting king who feature in the Motau report are:

* Paul Makhavhu, at the time Ramabulana’s advisor, allegedly received R30 461 788. The Motau report quotes Makhavhu as describing the very substantial payments made to him and the Venda king as “shameful”.

* The Dzata Trust received a R9 million deposit and an R8.5 million facility.

Makuya, Mafunzwaini, the Dzata Trust, and the Vhavenda Heritage Trust were all identified as being associated with the acting Venda king.