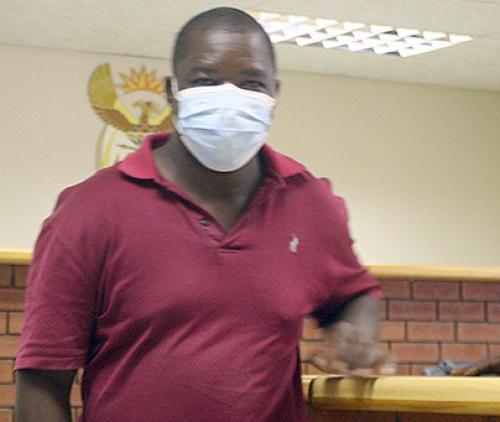 W/O Michael Raedani (56) of the Mutale police station walks into the courtroom where he and the other accused applied for bail.

Two policemen and a community member, facing charges of armed robbery with aggravating circumstances, were granted bail by the Mutale Magistrate’s Court on Friday.

W/O Michael Raedani (56), who is stationed at the Mutale Police Station, and Sgt Reuben Madida, from Waterval Police Station, were granted bail of R5 000 each, and their co-accused, a community member from Khubvi village, Mr Rodgers Ramagoma (29), got bail of R2000. Their case was postponed to 1 September for further police investigations.

The spokesperson for the Limpopo Regional Public Prosecution Authority, Ms Mashudu Malabi-Dzhangi, said that the neutral magistrate who had been called to preside over the matter, Ms Grace Mashao, had stipulated as a condition of bail to the all accused that they must not interfere with witnesses and they must attend the court proceedings until the finalisation of the case.

Limpopo police spokesperson Brig Motlafela Mojapelo said the accused had been arrested for allegedly robbing a police officer attached to the local criminal records centre of the SAPS in Kempton Park and his wife of an amount of cash and State tablets at gunpoint.

According to Mojapelo, the robbed police officer, who was in the company of his wife, was driving along the Tshandama-Khubvi public road when he was allegedly ordered to stop by the occupants of a Ford Focus. In the process, they pointed a firearm at the couple.

“The victim kept on driving until he was allegedly blocked by another vehicle, a Jeep Cherokee. He and his wife were then robbed at gunpoint of an amount of R2 400, vouchers of R8 000 and State tablets. The couple alerted the local police, who immediately commenced with investigations, which led to the arrest.”