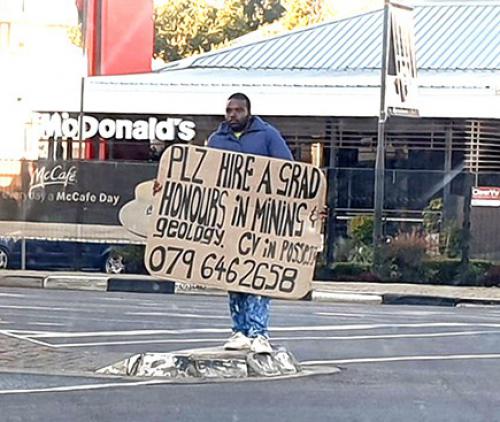 Tshimangadzo Radzumo stands at an intersection in Rosebank, looking for a job. Photo: Morris Joseph.

A picture is worth a thousand words, the adage goes, but in this case one can probably write books about it.

About a week ago, a photo started circulating on social media about a young man standing at an intersection in Rosebank, Johannesburg. “PLZ HIRE A GRAD. HONOURS IN MINING GEOLOGY,” the placard reads that he is holding.

Late last week, a journalist friend from Cape Town sent through a message. “He is from you neck of the woods. Perhaps you should interview him.”

On Friday, I managed to track down Tshimangadzo Radzumo, the young, unemployed mining graduate. He told me he came from Ha-Madodonga, some 30 kilometres west of Louis Trichardt. His story is not a strange one. In fact, the commonalities are probably the most disturbing part.

Tshimangadzo grew up at Ha-Madodonga, a rural area a few kilometres south of the western Soutpansberg mountain range. He finished his matric at Maneledzi Secondary School in Tshiozwi, a neighbouring village.

In 2006, his mother died, but his father and the rest of his family filled in to give him whatever support he needed. He finished his matric in 2011 and then enrolled at the University of Venda for a Bachelor of Science degree. He finished his degree in 2017, specialising in mining and environmental geology.

The next year, Tshimangadzo moved to Johannesburg, where he completed his practical experience at the PPC cement factory in Heriotdale. He was set to pursue a career in mining or a related industry. He knew that his family had worked hard, denying themselves many luxuries, to give him a good start in life. The only problem is that he, like so many other skilled young people, cannot find a job.

But Tshimangadzo is not about to give up. He stays in Diepkloof in the south of Johannesburg, believing that he has a better chance of securing a job if he is in Gauteng. In desperation he turned to the streets, openly advertising his skills in the hope that he would get noticed. “I have had a few enquiries, but nothing has materialized,” he said last week.

Tshimangadzo is one of many young people who battle to find employment in a country where the official unemployment rate soared to 30,1% last week. Stats SA announced that 7,1 million of the country’s citizens are officially without a job. If the job seekers who have stopped actively looking for employment are also taken into consideration, the rate jumps to 39,7%.

The sad news is that the picture is not likely to improve in the next year. The figures supplied by Stats SA were of the situation before the Covid-19 pandemic struck. Since April, Covid-19 has caused unfathomed misery in the economy, with millions of workers losing their jobs or about to be retrenched. The World Bank predicted that, mostly due to the Covid-19 pandemic, the world economy will shrink by 5,2% in 2020. This is the worst recession in 80 years.

In the Limpopo Province, the situation might appear to be slightly better than in Gauteng, but this is very artificial. Tshimangadzo is a good example of how the unemployment burden reflects on Gauteng, but the reality is just as dire for Limpopo.

According to the latest Stats SA figures, unemployment jumped to 23,6% in March. This is a 5,1% year-on-year increase. The industries that shed the most jobs the past year are the agricultural sector (16 000 jobs lost) and the community and social services sector (19 000 jobs lost). The transport sector shed 9 000 jobs, the mining sector 7 000 and 13 000 workers in private households lost their jobs the past year. Workers in the trade sector were the worst hit, with 37 000 job losses.

None of this is good news for Tshimangadzo. He battles to find a job in Gauteng, and he also knows that returning home will not increase his chances. Economists have warned that the worst is yet to come, with the national unemployment rate expected to go as high as 50%.

If you do have a job that needs a candidate with a BSc in mining and environmental geology, please remember Tshimangadzo. You may find him on a corner of a busy intersection in Rosebank. You could also call him on 0796462658.

(*The original story that was posted referred to Tshimangadzo as a mining engineer, which of course is incorrect. He is not an engineer. - Ed)