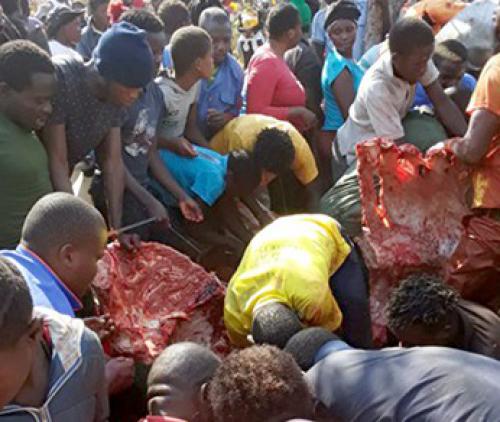 Residents busy cutting the pieces from the elephants that were shot by the rangers. Photo supplied

Four elephants that were roaming around Ha-Gumbu and surrounding villages were tracked and shot by rangers last Friday.

The elephants, who came across the border from Zimbabwe, sent shockwaves through the area as the lives of residents were under constant threat. The residents complained that the elephants came out mostly in the dark and had uprooted crops, fences, and irrigation pipes of the local farmers. Almost every household owns a garden for self-sustenance, and small-scale commercial farming thrives here. The invasion by the elephants was giving the villagers sleepless nights.

Like many farmers in the area, community spokesperson Mawahsane Mudzweda is still traumatised by one incident in which an elephant trampled and killed a man who had gone into the bush to look for his cattle. Although no statistics were available, villagers said a few people had been killed by the huge beasts. “These elephants move from Zimbabwe to our areas. Last year, rangers had to kill one that was terrorising our neighbouring village,” said Mudzweda.