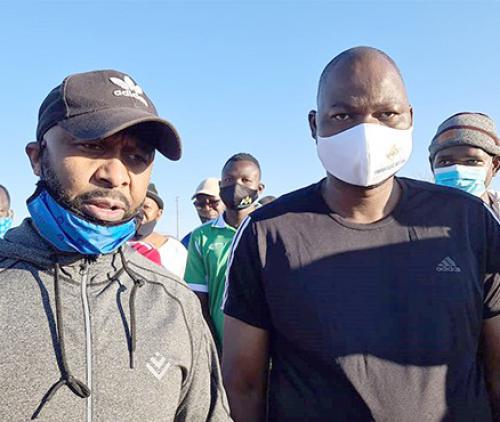 Former Bafana-Bafana captain Lucas Radebe is urging the communities of Vhembe and Limpopo to support the vision of Thovhele Ndivheni II Nesengani of turning Vuwani into a city.

Radebe, or ‘Rhoo’ as he is affectionally known to Kaizer Chiefs supporters, sent out this message during his participation in the 12-kilometre Presidential Walk on Tuesday morning at Vuwani.

The Presidential Walk was initiated by Thovhele Nesengani in response to President Cyril Ramaphosa’s call to the citizens to participate in a morning walk to keep themselves healthy.

Since he was installed on the throne on February 7 this year, Nesengani initiated the 12-kilometre walk that he leads from his palace in Vuwani to Muvhenzhe junction and back every day at 06:00, with the support of some members of the royal council and any community members who might be interested to join.

Nesengani also initiated the building of Agricultural City in Vuwani to create jobs for the people of Vuwani, Vhembe and Limpopo.

In his attempt to build awareness and garner support for his vision, high-profile people such as Black Coffee, a South African-born DJ who is internationally acclaimed, has already visited Vuwani to pledge his support.

In his exclusive interview with Limpopo Mirror during his participation in the walk, a very fit and slim Radebe said he was impressed by Nesengani’s vision. “To see a royal leader embarking on a vision like this in such a rural area in South Africa tempted me to decide to join this walk, so that I can show my full support.

“By doing this, I am also sending a message to the people around here to come and rally their support for this visionary leader. This remind me of my background where I grew up in Soweto and played for big teams like Kaizer Chiefs, Bafana Bafana and Leeds United in England,” said Radebe, who was awarded the freedom of the City in Leeds, England.

Radebe, who has been referred to as ‘Chief’ by Leeds fans, jokingly said that, from one chief to another, “we are together in this Presidential Walk in order to send a strong message that we are serious about this vision of turning Vuwani into an agricultural city”.

“This is an amazing dream.  It reminds me of how I grew up.  But with Mandela’s vision, today I and many other people are where they are today.  The same vision that my chief friend, Thovhele Nesengani, has will also become a reality one day,” said Radebe.

Meanwhile, Thovhele Nesengani said he was excited about Radebe’s support.  “We are inviting prominent figures to be involved in our Presidential Walk that is happening every day except Wednesday, to popularise our vision.

“Vuwani has been known for bad things, like violent protest marches and burning of buildings.  So, we want to restore our image and prepare people for our new direction,” said Nesengani, who also hosted Vhembe Executive Mayor Dowelani Nenguda and the local mayors of Thulamela, Makhado and Collins Chabane, when he shared his vision with them at his palace last Tuesday.