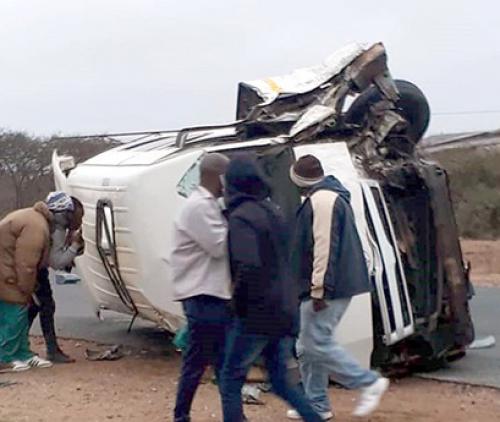 Community members look at the wreck of the taxi. Photo supplied.

A well-known taxi owner, Mr Peter Mphaphuli (62), was killed on Tuesday afternoon in an accident involving two taxis. The accident happened on the road near Madombidzha, and six passengers were also injured.

The news of the accident spread like wildfire and, within a short space of time, cars were parked for kilometres while people scrambled to have a glimpse of the accident scene. Clearing up the scene took more than two hours and the road between Madombidzha and Makhado Air Force base remained closed throughout the operation.

The six people who were injured were taken to the Louis Trichardt Memorial Hospital.

The reason for the accident is not yet known, but the bad condition of the roads in the area may have been a contributing factor. The roads in the Sinthumule and Kutama area are considered very dangerous, with potholes and stray animals ever present. In the past few months, at least six people have lost their lives on the same stretch of road.

Advocate Desmond Mphaphuli, brother of the deceased, said they were still shocked by this horrific accident. “We regarded him (Peter) as our pillar. He was always available to solve our problems,” he said. “He was a visionary and a strategic thinker in the transport business. We have received many messages of condolences locally and from abroad and it shows us that my brother was a people’s person and accommodating to everyone, irrespective of colour, race, and religion,” he said. “Only God who knows why it happened like this. It is very painful to lose people like this.”

The chairperson of the Dzanani II Taxi association, Mr Anton Siima, said that he was shocked to hear that one of the association’s members had been killed in a fatal accident. He expressed his condolences to the Mphaphuli family.

“The role Mphaphuli played in fostering unity, discipline, hard work and dedication within the association and community shall always be cherished,” Siima said. “Our thoughts and prayers are with the family of the deceased during this time of grief, and we wish a speedy recovery to the injured ones”.

The provincial spokesperson for the police, Brig Motlafela Mojapelo, confirmed that they had opened a culpable homicide docket and the cause of the accident was still under investigation.

An injured passenger lies on the ground, waiting for medical staff to arrive. Photo supplied.