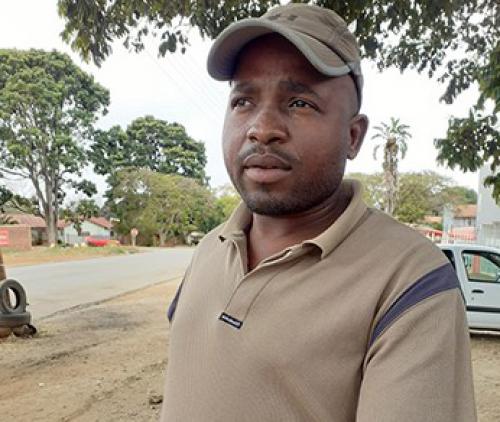 Thabelo Makhavhu alleges that he was assaulted by police officers for failing to reveal the whereabouts of his brother.

“Police assaulted me for nothing,” claims Ravele man

The Independent Police Investigative Directorate (IPID) is investigating allegations that members of the Tshilwavhusiku police station assaulted a young man from Ravele.

Thabelo Makhavhu accuses the police officers of assaulting him a fortnight ago when he allegedly failed to reveal the whereabouts of his brother. Makhavhu said he was at home at Ravele when police officers confronted him. “They said they were looking for my brother and that I would pay dearly if I did not tell them where he was,” he said.

Makhavhu alleges that he told the officers that his brother was not at his house, whereafter they started beating and kicking him. “They kicked me in the stomach and on my private parts, while my hands were tied behind my back. I experienced severe pain and collapsed,” said Makhavhu.

Makhavhu said that he phoned the emergency services and was taken to the Louis Trichardt Memorial Hospital. After receiving medical treatment, Makhavhu decided to go to the police station to open a case against the police officers.

According to him, he went to the Tshilwavhusiku SAPS to open a case, but the police officers told him in the presence of other officers that he was wasting his time. According to Makhavhu, the officers said that they would “swindle” the case. He continued to open an assault case, in spite of the threats.

“I wish they could find those people who assaulted me, and then I wish government can pay me,” he said.

The spokesperson for IPID, Ndileka Cola, said that a case of assault with intent to do grievous bodily harm had been opened at the Tshilwavhusiku police station. She said that IPID was still investigating.