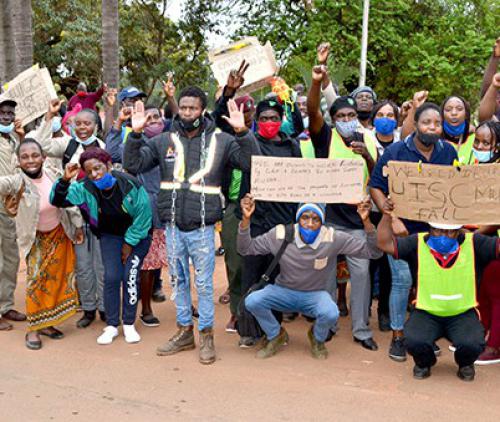 Some of Univen's UIGC workers were marching near the gate of the University of Venda earlier this week, demanding a salary increase.

Some 300 employees of the University of Venda’s Univen Innovative Growth Company (UIGC), mostly working as security guards, general workers, and cleaners at the university’s Barotta farm in Tshakhuma, are on strike. Earlier this week, the workers protested outside the entrance gate of the university, demanding a salary increase of 7.5%.

A security guard working at Barotta farm, Mr Erick Khathutshelo Ndou, said they wanted the UIGC to pay them a decent salary. He said they usually earned about R2 000 a month, while other security guards working inside the university premises were getting salaries of more than R6 000 per month.

“Our normal schedule of working 21 days a month has been reduced to 15 days or less, which causes us to earn less money. When we tried to inform our manager, she sent us from pillar to post, saying she cannot help us,” said Ndou.

Ndou said the company also did not take them seriously in terms of giving them uniforms they should wear when going to work.

Another security guard, Mr Victor Mabada, who is also the chairperson of the Academic and Professional Staff Association (APSA) in the area,  said they had received permission to strike from the Commission for Conciliation, Mediation and  Arbitration (CCMA) after having unsuccessfully tried to engage with the UIGC about the matter.

He said they had not been given provident fund contributions, any bonuses or salary increases for many years. Mabada said workers who were contracted to the university had been offered permanent positions by the university some four years ago, but the UIGC staff members were not included.

Univen spokesperson Dr Takalani Dzaga said they were aware of some of the problems raised by the UIGC workers. He said that management was looking into the matter and an amicable solution could hopefully be found.

Dzaga said, however, that the strike was illegal because the management at UIGC had lodged an appeal with the CCMA.