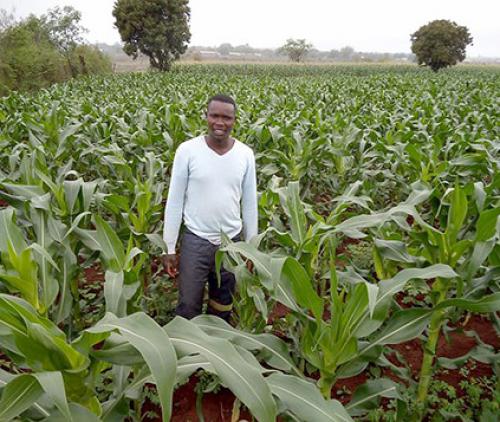 Muvhuso Netshitandani encourages young people to create their own jobs. He is captured in his two-hectare field at Matangari-Tshiumoni. Photo supplied.

“As young people, we don’t have to wait for the government to provide us with jobs. We must wake up and create jobs for ourselves. Sitting at home and begging someone to become your employer is a waste of time. We have the power to change our lives.”

This is the inspiring message of hope from the 25-year-old Muvhuso Netshitandani from Matangari-Tshiumoni village, near Makonde. While other young people of his age are struggling to find decent jobs, Netshitandani has found solace in working in the fields to produce vegetables, maize and sweet potatoes that he sells to the public. He has created two seasonal jobs for local villagers who were previously unemployed.

He said: “I tried looking for a job, but I realised that I was wasting my time because there is plenty of land that I can till to generate some income. I call upon other young people to follow suit because everyone needs some food out there. They should come on board and start producing food that they can sell to the public. Even a small vegetable garden can go a long way in fighting hunger and unemployment,” said Netshitandani, who owns two hectares of land that he works on.

The hardworking young farmer said he drew inspiration from his elderly father, Daniel, who had been a farmer throughout his life. “We never struggled at home because my father was able to provide for the family through his small farming business. I used to help my father in the fields, not thinking that this could be my source of income one day.”

Netshitandani acknowledged the challenges that come with farming: “As rural farmers, we have to spend the little profit we get to keep the business running. For example, I have to hire tractors to prepare the land, buy fertiliser and pesticides to make sure that I have good products. Sometimes, the weather becomes so bad that you lose everything that you have planted.  But despite all these challenges, I will never quit because farming puts food on my table.”