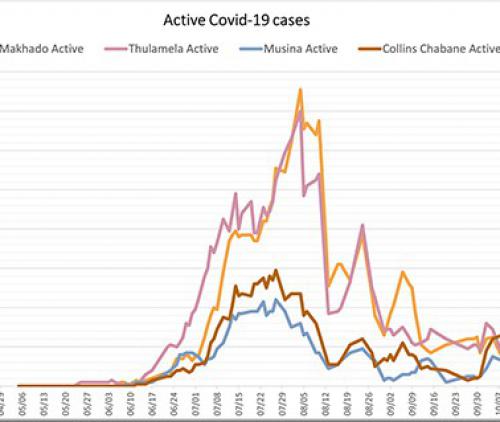 The graph shows that the number of active Covid-19 cases peaked in August.

Covid-19 curve has stabilised in Vhembe, but don't relax

The Vhembe region may have escaped the brunt of the Covid-19 onslaught, but residents are warned not to relax and to be very wary of the threat. The graphs indicate that the highest number of active cases in Vhembe was recorded on 8 August, when 370 people were carriers of the virus. This number has gone down to 62 and has fluctuated between 45 and 85 for October.

On 1 November, a total number of 2 167 patients in Vhembe tested positive for the coronavirus. The virus had already claimed 64 victims by then.

The two regions competing for the most cases are Thulamela and Makhado. Thulamela recorded more infections up to mid-October, but Makhado then passed its tally. On 1 November, Makhado’s total of infected people stood at 825, with Thulamela not far behind on 812. The Collins Chabane district came in third at 308 cases, with Musina fourth with 222 cases.

As far as fatalities are concerned, Thulamela recorded 29 deaths, against the 26 in Makhado. At Collins Chabane, seven deaths were recorded and at Musina only two people died after being infected.

Whether the pattern will continue is debatable. Worldwide, countries such as the United Kingdom went into a second “hard” lockdown the past week. In the United States, a record number of 100 000 new cases were reported in a single day, and on Tuesday the country was heading towards 9,4 million infections.

Predicting how deadly the infections are, is difficult. South Africa, and especially the Vhembe area, has a relatively low mortality rate. Of the 2 167 people who tested positive for the virus, only 64 died, representing a mortality rate of less than 3%. In countries such as Italy, the picture is a lot different. This country has recorded more than 730 000 cases, with 39 000 deaths. This means that Italy’s Covid-19 mortality rate is almost twice that of South Africa (which stood at around 2,7%).

The World Health Organisation (WHO) has urged countries not to let their guard down in order to curb the further spread of Covid-19. In a media briefing two weeks ago, WHO Director-General Tedros Adhanom called for “compromises and sacrifices” in the fight against the pandemic.

The question as to when a vaccine will be available is almost impossible to answer. An unprecedented urgency exists worldwide to develop and test possible vaccines. Most experts think a vaccine will not be widely available until the middle of 2021.

In South Africa, pharmaceutical giant Aspen Pharmacare announced last week that it had entered into a preliminary agreement with Johnson & Johnson to manufacture its Covid-19 vaccine candidate at its facility in Port Elizabeth. Aspen says this facility has the capacity to produce more than 300 million doses per annum.

The graph shows the total number of cases reported in Vhembe in each of the four districts.

The combined totals in the Vhembe District.