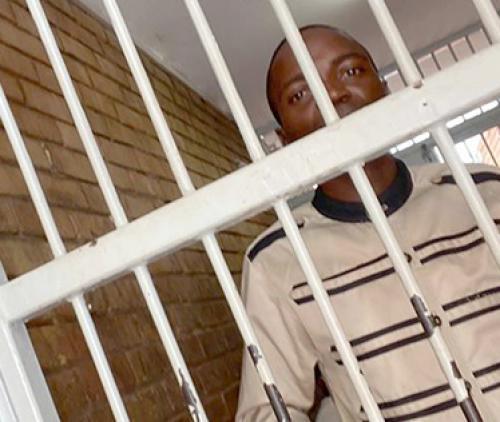 Popular comedian and socialite Livhuwani Madadzhe (31) spent the weekend in jail. He was arrested on Saturday for allegedly driving with illegal flashing lights and not stopping when confronted by law enforcers.

“Captain SABC”, as Madadzhe describes himself, was arrested on Saturday for contravention of the National Road Traffic Act. In a statement, Limpopo SAPS spokesperson Col Moatshe Ngoepe said that traffic officials were busy conducting their daily duties at Mphephu drive when they spotted a silver Audi A4 motor vehicle without number plates. The vehicle had flashing emergency lights and was blocking the road while apparently escorting certain vehicles.

The traffic officers apparently tried to stop Madadzhe’s car, but “the driver didn't stop; instead, he drove at high speed towards Thavhani Mall”, said Ngoepe. Police back-up was summoned, and the suspect’s car was stopped at Thavhani Mall.

“Preliminary investigations revealed that the driver did not have a driver's licence in his possession as he failed to produce it. The vehicle’s licence disk had expired,” said Ngoepe.

Madadzhe was arrested on the spot and had to wait until Tuesday morning before he could appear in the Thohoyandou Magistrate’s Court. When he eventually made a quick appearance, the case was postponed to 8 December this year. He was released on bail of R1 500.

When Limpopo Mirror contacted Madadzhe for comment on Tuesday, his assistant said he could not be reached. They promised to reply once he was available.

In the police’s statement, Col Ngoepe warns that driving around with emergency lights on their vehicles is illegal for ordinary citizens.

What does the law say about flashing lights?

Blue light may only be fitted on vehicles operated by:

Amber lights can be used on the following emergency vehicles:

Employed in connection with the maintenance of public roads; Engaged in the distribution and supply of electricity; Engaged in the supply of essential public services; Operated in terms of the authority granted by the MEC in terms of section 81 of the Act; Breakdown vehicles; Refuse-compactor vehicles; and Vehicles carrying an abnormal load and the vehicles escorting them, if any.

A flashing orange light may only be used as follows:

Where a breakdown has occurred; where maintenance or other work, or an inspection is being carried out; when a breakdown vehicle is towing a motor vehicle, or in the event of a vehicle carrying an abnormal load.

Also important: Vehicles other than emergency vehicles or vehicles authorised by the relevant MEC in a province may not be fitted with orange identification lights.