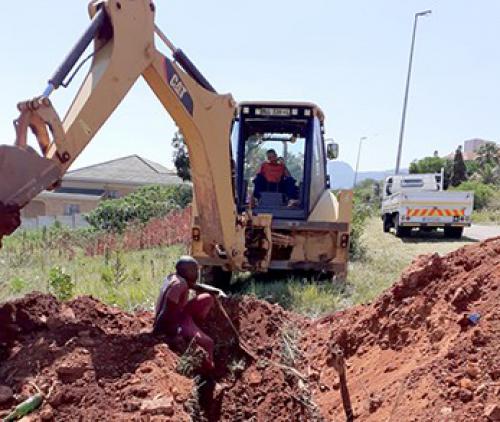 Workers had to reconnect the water system line that was previously connected to a sewage line by mistake.

A resident of Newtown in Louis Trichardt is appalled after opening a tap in his home, only to find what looked like raw sewage coming from it.

Taps running dry for days have become a common occurrence in Louis Trichardt, and when water does start to run, residents emit a sigh of relief and get up to fill whatever bottles and standby tanks with water from the municipal water-supply system.

But what if dark, smelly water runs out of the tap? And what if you report such an incident to the municipality and they do not bother to respond? Where do you go to get help during such hectic times?

A resident at Flamboyant Street, Mr David Mudau, was in his house when his daughter informed him that the taps in the kitchen were not running, shortly after the water had come back on in the area. “I went to check,” he said. “I opened taps in the bathrooms, and the water seemingly struggled to flow, but after some time, air shot out of the tap like a blast, followed by the thick, black water. An overwhelming odour instantly filled my house from that water. I was so shocked.”

His 5 000-litre tank outside the house rapidly started to fill, but with the same dirty water. “I quickly went outdoors and opened all the taps, so that the pipes might be flushed of all the smelly black liquids, but after 40 minutes the dirty water was still running.”

Mudau reported the problem to the municipality but was left shocked and angry because the municipality did not respond. “The matter was not treated as urgent,” he said. “My major concern is the municipality’s failure to respond to the reported sewage contamination in our water pipes. It is sad that our municipality does not care. Something is totally wrong there within the municipality. I have emptied almost 5 000 litres from the tank. I just have to find a way to clean the geysers. The problem is that when the water is restored, the sewer dirt will still be left in the tanks.”

However, not only one household was affected. Just about all the houses along Flamboyant Street, from the corner of Meerkat Street, suffered the same fate.

Residents felt that the municipality should have alerted the entire area about the incident and provided a tanker in the meantime. “Why didn’t they inform us immediately before we and our children could drink the water? They thought no one would find out,” said another resident. “You can't even allow your livestock to drink this kind of water.”

When Mudau attempted to contact the municipality again, they admitted that the problem was serious and promised to come out and clean his tanks. “The promise was never fulfilled,” he said on Friday. “I waited the whole day for the municipality to come and clean the pipes and my tank, but nothing happened.”

However, a message, purportedly authored by the Vhembe District Municipality’s manager, Ms Sylvia Ndou, was circulated among “colleagues” after Louis Trichardt resident Cllr Brian Du Plooy had communicated with the municipality shortly after his visit to the problem site. Videos of the filthy water flowing from taps also started circulating on WhatsApp.

The message reads: “Good morning colleques (sic). The video you have seen circulating is the true reflection of what happened at Makhado flamboyant street. The contractor who is alleged to be installing fiber cables happened to break up both the water and sewer system pipelines. When reconnecting, he allegedly connected wrongly and as a result the sewer system supplied effluent to the household. To this far the sewer one has been reinstated correctly and they are now busy with the water one. The whole system will be flushed and disinfected. Our water quality team will be strictly monitoring the situation. The storage tank of the same household will be attended to. The District will also have engagement with the contractor responsible in order to address the challenge.”

On Friday afternoon, Limpopo Mirror visited the site where the mixing of the system supplying effluent and the water-supply line had allegedly taken place. When our reporter arrived at the site, he introduced himself to contract workers and requested to take pictures of the damaged site. The workers, however, responded by threatening him with violence and even confiscated his camera phone, threatening to smash it. A monitoring official, probably from the municipality, intervened and warned the men not to smash the journalist’s camera phone, but to rather hand it back because the journalist was doing his job.

Cllr Brian Du Plooy said that he had visited the site earlier. “I accompanied a municipality official and we visited the site,” he said. Du Plooy realised that the contractor on site had messed up, allowing raw sewage to flow into the water-supply system. “We got the district municipality to intervene, and we had a meeting on the site. As far as I know, they cleaned up the system, even though it was not the same day,” said Du Plooy.

Du Plooy was critical of the service rendered by the district municipality, saying it should not be left to a neighbouring ward councillor to identify such problems. “How many people could have got sick? So far, we do not have any casualties, but this is a very serious incident. We need to handle it like that, for a lot of people could have been hurt.”

A detailed media inquiry was sent to spokesperson Mr Matodzi Ralushai of Vhembe District Municipality (VDM) who said that he had forwarded it to the technical department for comments. He was also requested to confirm whether the WhatsApp message circulated among “colleagues” had indeed been authored by Ndou (municipal manager).

On Wednesday he replied, admitting that one of VDM’s sub-contractors was actually responsible for the mess and not a private contractor laying fibre lines. “The municipality does not deal with fibre cable. We really need to correct the initial statement that the contractor was busy with fibre cable,” he said. Ralushai said that the VDM’s technical department had urgently assembled a team to address the problem and Cllr Martha Babadu and Cllr Du Plooy were invited to monitor the operation.

“The contractor involved was also called to redress the mistakes and he did as required. The municipality is evaluating the report and concentrating on the redress of the issue and will attend to the contractor’s mistake internally, in line with the relevant pieces of legislation,” Ralushai said.

On Wednesday, another resident, who was away when the sewage ran through the water pipeline, said that when he returned on Tuesday, he found that the entire water-supply system in his home had blocked up. “We reported the matter to the municipality, but they are not responding,” he said. “How are we going to live in this town with a dormant municipality? Is this a way of life?”

Dirty smelly liquid runs out of the taps in Newtown, Louis Trichardt.