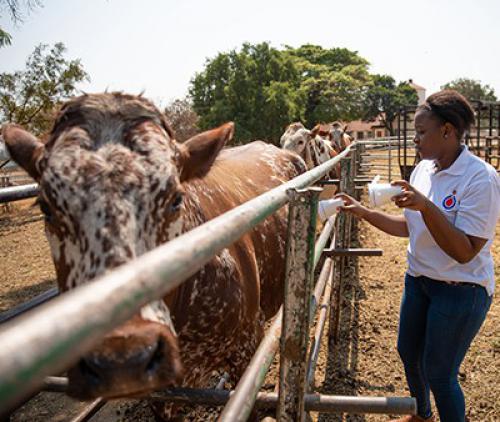 Only after University of Pretoria (UP) graduate Takalani Makhanthisa had begun her postgraduate studies in entomology did she realise that more than half of South Africa’s cases of malaria occur in the Vhembe District in Limpopo, her home. Now Makhanthisa hopes her research towards her masters, focusing on malaria and other vector-borne diseases, will help make a real difference in the lives of those in her community.

Makhanthisa, who works with the UP Institute for Sustainable Malaria Control, graduated recently during a ceremony held virtually because of the Covid-19 lockdown restrictions. Her BSc degree in genetics and honours in biochemistry at UP also focus on malaria-related projects.

“Growing up, I was aware of malaria, but I did not know that it was affecting so many people from my district until I got to varsity and started reading more about it [at postgraduate level]. I was also made aware of its burden when I visited relatives in malaria-endemic villages. I would hear stories of family members’ neighbours who had passed on because of malaria. It is devastating for families to lose their loved ones to malaria,” she says.

She was also told of many learners in villages who missed school after contracting malaria. Her uncle contracted the disease and was hospitalised for a long time. “It took some time before the family could figure out what disease he had because they initially thought it was flu, but it just got worse. I think it is important for people to be educated about malaria, its symptoms and preventative measures, such as bed nets,” she says.

Makhanthisa, who obtained her master’s with distinction, says about 60% of South Africa’s malaria cases occur in the Vhembe District of Limpopo. “Malaria research is very close to my heart, knowing that the district that I come from is burdened by this disease.” During the course of her studies, she realised that most malaria-endemic villages in the Vhembe District have lots of livestock “so I decided to investigate the malaria and vector-borne disease strategy because I thought this would be feasible in the region”.

She was awarded the Dr Sylvia Meek Scholarship for Entomology in 2018 by the Malaria Consortium, in memory of its co-founder, Dr Sylvia Meek, who was a leading international scientist in the fight against vector-borne diseases, particularly malaria. “This is a very prestigious scholarship, and I am very fortunate to have been one of five scholars to have been awarded it. Two were from Thailand, two from Nigeria, and then there was me,” says Makhanthisa.

The scholarship was established to ensure future generations of entomologists continue Dr Meek’s legacy. “I am grateful for such a great opportunity. I was also a bit overwhelmed because I knew I had to do very well and be an example to future scholars,” she says.

Supervised by Dr Heike Lutermann from UP’s Department of Zoology and Entomology in the Faculty of Natural and Agricultural Science and Professor Leo Braack from Mahidol University in Thailand, Makhanthisa investigated the effectiveness of a possible outdoor malaria vector-control strategy: cattle-administered endectocides. “The current malaria control strategies of bed nets and residual spraying are indoor strategies and do not protect people from malaria when they are outdoors. There is a need for development and implementation of an outdoor malaria-control strategy,” she explained.

“My findings propose that cattle/livestock-administered endectocides could potentially be used as an outdoor malaria control strategy if used strategically. This strategy might work in malaria-endemic regions such as the Vhembe District in Limpopo where there are high livestock numbers,” she says.

Endectocides are drugs already used to treat parasites such as ticks and worms in livestock and which, Makhanthisa says, have been found to be effective against the survival and egg production of malaria mosquitoes. “Treating cattle and other livestock with these drugs in malaria-endemic regions might help reduce malaria-vector mosquitoes and could potentially be implemented as a control strategy.”

She explained that field studies investigating these drugs are limited, and much research is required before the strategy can be implemented. “To the best of my knowledge, this was the first study in South Africa to investigate the use of cattle-administered endectocides. Such studies have been conducted only in a few other countries.”

Makhanthisa is pleased to have completed her master’s and is grateful for the doors it has opened. “We are getting the first manuscript ready for publication, and I am excited about it,” she says, smiling. She has registered for a PhD in medical entomology after being awarded another international scholarship by EcoHealth Alliance, an environmental non-profit organisation dedicated to protecting wildlife and public health from disease.