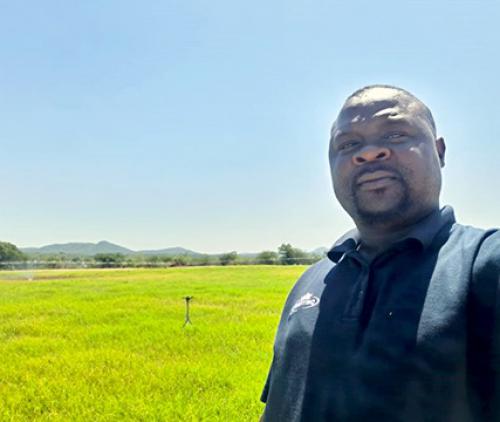 Cllr Enoch Sithi in front of the soccer field at Mukondeni. The grass surface is progressing well.

Enoch Sithi, Makhado Municipality’s Ward 12 councillor, responded this week to criticism about the Hangwani Mulaudzi project in Mukondeni village, saying that they had monitored the project carefully to ensure that the local community benefited to the maximum.

Cllr Sithi explained that he is not involved in the Hangwani Mulaudzi Foundation, the non-profit organisation that received R3 million from the National Lotteries Commission (NLC) to build a sports field at Mukondeni village. The foundation is headed by the spokesperson for the Hawks, Brigadier Hangwani Mulaudzi. The foundation has since changed its name to the Bono Foundation.

Sithi served as an ex-officio member of the project’s steering committee. Members of the steering committee were elected from the local community and they are Mbulani Mufamadi, R Mashamba, Ndivhudza Tshavhubwa, Reginald Thangoane and Mafanato Mukhari.

According to Sithi, this forms part of his responsibilities as ward councillor. In Ward 12, he oversees nine villages. He said that the steering committee’s members were not involved in the funding process, and merely assisted with the logistics, which included identifying a site where the sport facility was to be built.

The project made national headlines a few weeks ago when calls were made that the project be investigated. A member of parliament, the Democratic Alliance’s Mat Cuthbert, described it as a conflict of interest. He said that law-enforcement agencies were currently investigating the NLC for serious irregularities and possible large-scale corruption. He called for Mulaudzi to be suspended and the grant to be investigated.

During interviews, Brig Mulaudzi denied that he had any knowledge of investigations by the Hawks into NLC grants. He also maintained that his role was to communicate information about the Hawks’ activities and that he merely passed on what was provided to him.

Mulaudzi’s foundation received the R3 million grant in July last year but work only started around June this year. During an interview on 24 June, Mulaudzi told Limpopo Mirror that the project had been delayed because he first had to engage the Mashamba village leadership and members of the community to obtain land where the facility could be built. This process was concluded in September 2019 and the project could commence. However, construction was badly affected by the Covid-19 lockdown period, he said.

On Monday, Cllr Sithi said that his role as councillor was to ensure that the local community’s best interests were served. He insisted that local labour be used and that local contractors be utilized to do the work. “Ninety percent of the work done there was done by local people,” he said.

Sithi emphasized that he believed the project delivered value for money. Apart from the soccer field that was established, a netball court and ablution facilities were erected. The centre was fenced off and a borehole was sunk. The borehole was equipped, and the four tanks hold a combined 20 000 litres of water. The soccer field also boasts a freshly planted grass surface.

For Sithi, this is just phase one of the development. His dream is to expand it into a proper stadium where even PSL teams such as Black Leopards and TTM can host matches. Such ambitious plans mean that the area's infrastructure needs to be upgraded. Roads leading to the village are currently in the process of being upgraded.

Sithi also criticized reports implying that the local ANC branch members were involved in the Lotto-funded project. He described this as a vindictive smear campaign, stemming from people opposing the current leadership.

In previous reports, allegations were made that Mr Mulondo Victor Ramatsekisa served on the Nelson Mandela branch of the ANC. He is the father of Marubini Livingstone Ramatsekisa, who is a manager: Grant Funding at the NLC.

Sithi stated for the record that this is not true. He said he (Sithi) was the chairperson of the local branch and the other office bearers were Samuel Lekada (deputy chair), Shadrack Rampaka (secretary), Future Thangwana (treasurer) and Brenda Hlangwani. He added that Victor Ramatsekisa did not serve on the project steering committee.

The sports facility is equipped with a borehole, ablution facilities and water tanks.