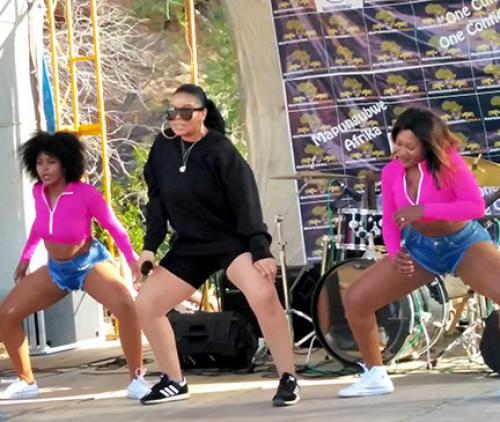 In black attire is Chomie, the Sowetan-born musician entertaining the gathering.

“People are not really noticing an emerging trend from the Limpopo province. Artists from this province are taking over the world,” said Chomie, the Sowetan-born musician. She was one of the performers at the Mapungubwe Africa cultural event on Saturday. The event was held at the Mapungubwe heritage site.

Mapungubwe Africa, a non-profit organisation whose aim is to perform cultural arts in Musina and abroad, organised the event. The festival was supposed to have made its first mark last year, but because of logistical problems had to be scheduled for March 2020. As a result of the Covid-19 lockdown, the festival was postponed to October 31.

According to Chomie, such cultural festivals should not only be held during heritage month. “It is high time that we embrace our culture and our natural environment, as this defines who we are,” she said, leaving the crowd calling for more entertainment.

This is the first event of its kind in Musina. Freedom Boikanyo, one of the directors, said this was going to be an annual event in Musina. Boikanyo has a history of working in the arts and cultural sector. He is also the provincial coordinator of the Cultural Creative Industry Federation of South Africa.

“I have learnt from the number of people who gathered that Musina residents love this event. I believe this is going to be an annual event where we share our cultural heritage and remind ourselves who we are,” said Boikanyo.

The event was attended by groups such as the Golden Girls (senior citizens) choir from Musina. Learners from different schools in Musina also performed cultural dances such as Xibelani, Mmino waSetho and Tshigombela.