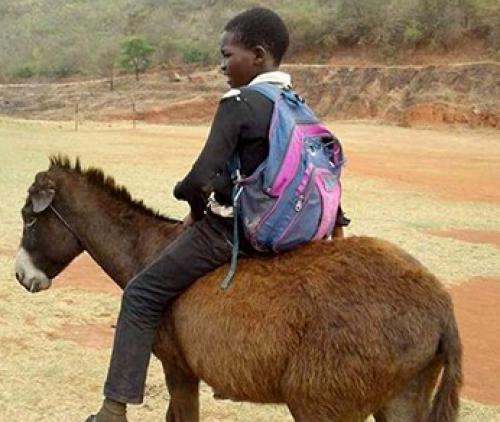 For the 15-year-old Faranani Mabuli, his trusted donkey was his only “ride” to school and back. When the donkey died a few weeks ago, he was stuck and had to walk to school, some five kilometres away from his home at Tshiavha Muremelani.

The story and photo of Faranani on his donkey went viral early in October. National newspapers carried the sad story of the death of his donkey and it quickly spread on social media. Many people were touched by the plight of the young man needing to find his way on foot to Tshiheni Primary School.

A good Samaritan arrived in the form of Mr Mathakha Mashau, a veteran of the 1976 youth uprising. His heart went out to the boy and he decided to donate a bicycle, a new full school uniform and a bag of maize meal to the family.

“On the 6th of October, I read an article about a Grade 6 learner who rides a donkey to school, and the report also stated that his donkey died and he now has to walk for many kilometres to school,” he said. Mashau was also concerned about the continued education of the young man.

“I want this boy to go to school and be educated, so that he can be someone in his community,”  he said, “ I  don’t want him to miss out on education because he doesn’t have a school uniform or can’t walk to school because of the distance.”

Ms Selinah Nemandivhe, who is the boy’s aunt and guardian, was delighted when hearing that someone was willing to assist Faranani. “Now that he has a bike, he will no longer be late for school,” she said.

She explained that Faranani had lost his parents and he did not have any siblings or relatives besides her and her children. “I am the only family that he has, and my worry is when I leave earth, he will be left all alone,” she said.

“Truth be told, he is not doing well at school. He is 15 years old and still in primary school while his peers are in high school. I wish there was someone who can take him to school where he can learn a trade, so that he can easily get a job,” she added.