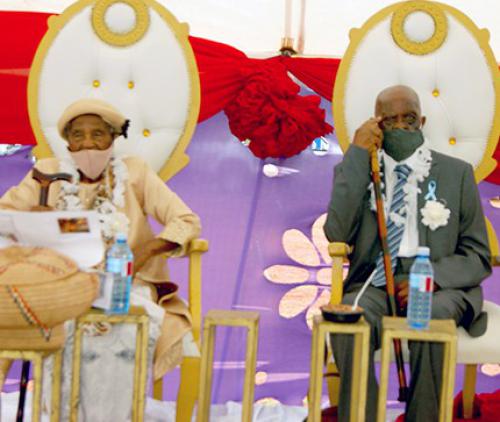 A celebration ceremony was held two weeks ago to honour the lives of an elderly couple from Gondeni Village who had left deep footprints in the lives and hearts of their community.

Vho-Rambelani Silas Badugela (94) and Vho-Mavhungu Maria Masekela-Badugela (90) were the honoured guests on this momentous occasion, when relatives and friends gathered at the Zwithuzwavhudi Secondary School to celebrate these two lives.

The chairperson of the celebration committee, Mr Phanda Mphanama, elaborated on the history of the Badugelas from the time they emigrated from Tshithuthuni and settled in Gondeni. He particularly pointed out their involvement in infrastructural developments and the enormous role they played in the Evangelical Lutheran Church in Gondeni and Limpopo province.

Chief Mutshutshu Mamatho from the Lunungwi village was taught by Vho-Mavhungu Maria Masekela-Badugela when he started school in 1968. “I still clearly remember when she welcomed our first class in 1968,” he said. “She was smiling and excited that there were new pupils, and she was ready to embark on a journey of education with us.”

Mamatho also recalls a time when the Badugelas bought him a pair of trousers around 1971, when he literally had no clothes and his guardians had no money to buy him any. “Is that not pure love?” he asked with apparent affection. “To me, that’s the kind of love we need in this world.”

Khosi Vho-Zwithuzwavhudi Mikosi said that the time for celebrating the lives of the Badugelas was long overdue. “They have showered us with love,” he said. “I remember clearly that the two were welcomed in our village by my late father many decades ago. Even as I grew up, I kept close relations with them because they are good people.”

Mr Solly Badugela, son of the esteemed couple, also addressed their guests and thanked everyone who attended the celebration. “Let’s now give the old man and the old lady the time to rest peacefully in their ripened age and not burden them with the worries of this world.”