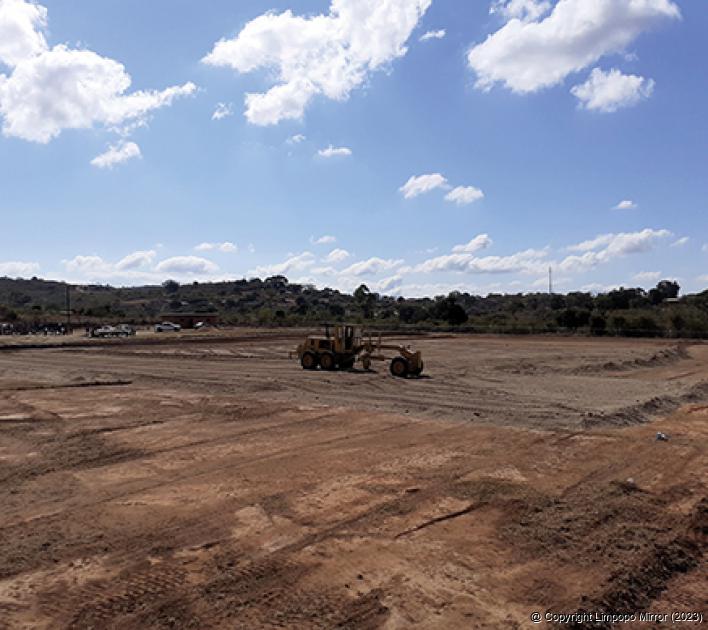 The groundwork on the controversial project at Mukondeni village started in mid 2020. When Limpopo Mirror visited the project in June the area had just been fenced off and the groundwork had started. Since then the netball court had been finished, grass was planted and the ablution facilities were completed.

Hawks spokesperson “did not” resign over Lottery grant

Former Hawks spokesperson Hangwani Mulaudzi, who resigned suddenly after it was revealed that his NPO received Lottery funding for a sports facility in is home village, has denied that this had anything to do with his decision to quit his job.

Limpopo Mirror has confirmed that the grant and how it was spent is now under investigation by a Hawks task team set up recently to investigate corruption involving Lottery grants.

Besides the R3 million grant for the sports facility in his home village of Mukondeni, Limpopo Mirror has confirmed that the Foundation also received R100 000 for food parcels from a National Lotteries Commission (NLC) Covid-19 fund.

Attempts this week by Limpopo Mirror, which was the first to report on the controversial grant to Mulaudzi’s NPO – the Mulaudzi Hangwani Foundation - were unsuccessful. The name of the foundation was changed to the Bono Foundation in August, about two months after the Limpopo Mirror first began probing the grant.

But Mulaudzi told Phalaphala FM that he resigned because he had lost his passion for his job. He is also concerned about his own safety and that of his family, he said.

“I have a family and when you work, you must put in all your passion. But that passion is gone. I've been taking blows left right and centre on a daily basis. I have been called names,” he told the radio station. “If there are investigations, they must come,” he said.

The Democratic Alliance (DA) had complained to Police Minister Bheki Cele and Trade Minister Ebrahim Patel after news broke of the grant. The DA’s Mat Cuthbert argued that the Hawks are currently investigating the NLC and such a grant could have been aimed at influencing the investigations.

“I don’t investigate, I only communicate,” Mulaudzi told Phalaphala FM.

Meanwhile, a Presidential Proclamation authorising the Special Investigating Unit (SIU) to investigate the NLC was published in the Government Gazette on Friday, 6 November. The proclamation was signed by President Cyril Ramaphosa on 20 October, but only came into effect when it was published.

The proclamation comes after ongoing reporting over the past three years by Limpopo Mirror and GroundUp about serious irregularities involving some multi-million-rand Lottery grants. Some of the reporting focused on dodgy grants to hijacked or seemingly dormant organisations and shelf non-profit companies.

The proclamation covers offences “which took place between 1 January 2014 and the date of publication of this Proclamation, or which took place prior to 1 January 2014”. It also covers any offences after the date of its publication that are “relevant to, connected with, incidental or ancillary to the matters … or involve the same persons, entities or contracts investigated under authority of this Proclamation”.

As an independent statutory unit, the SIU is accountable to Parliament and the President. It has powers to subpoena, search, seize and interrogate witnesses under oath. The unit also is empowered to “take civil action to correct any wrongdoing it uncovers in its investigations”.

Where it uncovers criminal conduct, the SIU can cooperate with the Hawks and the National Prosecuting Authority (NPA) “to ensure that there is an effective investigation and prosecution”. The SIU also works closely with the NPA’s Asset Forfeiture Unit “where its powers are more appropriate or effective in recovering the proceeds of crime.”