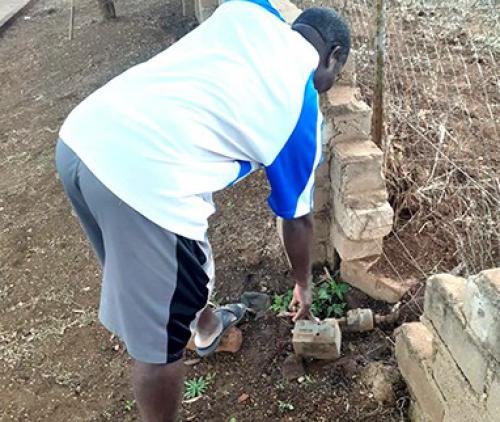 A member of the community inspects an illegal water connection at Mathule.

Illegal water connections in the Lwamondo-Mathule area have left many villages with dry taps. Residents have been without running water for quite some time now because of these actions.

One of the affected residents, Mr Alfred Netshidzivhani, explained that the problems had started a few months ago. When walking to fetch water from another part of the village, he noticed some of the people busy disconnecting pipes. “Now that you have cut off our pipes, what do you think we will drink?” he asked them. “You are killing us! This water belongs to all of us and not to you and your people alone.”

A member of the local civic association, Mr Reuben Netshiongolwe, said that he was highly disappointed to have witnessed this destruction taking place, as water spilled all over the ground because pipes were inserted illegally and directed to people’s households. “We are all deeply affected by this, because when people start taking matters into their own hands, and by stealing from themselves, they ruin the water infrastructure,” said Netshiongolwe.

He said that this was to the detriment of other communities that also needed the water. He appealed to the community to respect the water resources and to stop vandalising them. “We are calling on all community members to help us fight the illegal connection of water, so that our people can get water,” said Netshiongolwe.

The spokesperson for the Vhembe Municipality, Matodzi Ralushai, said that the communities were suffering as a result of such illegal connections of water in the area. “As government, we are trying by all means possible to provide water, but people are preventing poor people from getting water. Let us try and share the little water we have, so that every resident can have running water for domestic use,” appealed Ralushai.

He said the most worrying factor of illegal connections, however, was that they threatened the safety of all the people who lived in the area. “The loss of human lives, especially young children, due to the irresponsible actions of some residents is unacceptable. We therefore appeal to residents to stop this practice and to legalise their electricity and water connections.” He asked people to report incidents of illegal connections to the police.