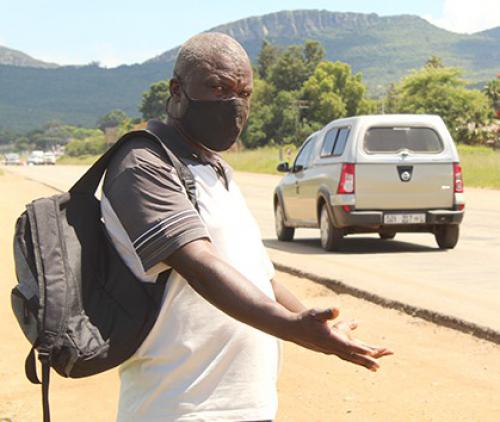 Bernard Chiguvari, one of Limpopo Mirror's journalists, hitchhiked from this spot outside Louis Trichardt in December, heading for the border post, so that he could spend the holidays with his family in Zimbabwe. He was then robbed of all his belongings and left alongside the Alldays-road. Photo by Kaizer Nengovhela.

What should have been a joyous time for one of Limpopo Mirror’s journalists this past festive season started out like a horror story.

As 2020 finally came to a close, Bernard Chiguvare was looking forward to going home to Zimbabwe to spend the holidays with his wife and family, whom he had not seen for a year. On the morning of 19 December, he obtained his Covid-19 certificate from the Soutpansberg Private Hospital and set off for the journey back home. He decided to just hitchhike from the Information Centre on the N1 in Louis Trichardt to Beitbridge border post and, with his two bags of luggage, waited for a lift.

A red Renault eventually stopped, and the driver offered Bernard a ride. The driver was accompanied by another man in the passenger seat in front. The men, in civilian clothes, told him that they were policemen. One of them even produced police identification, which identified him as S. Bongani.

They had gone only a few metres when the driver stopped to pick up another man, who also appeared to be hitchhiking. Bernard, who sat behind the front passenger, was starting to feel uncomfortable as the front seat had been pushed all the way back, leaving very little space for him to move. In fact, he almost felt as if he was trapped. He started to suspect that all was not well with the situation.

Some distance before Musina, Bernard’s suspicions were confirmed when the two men in front asked Bernard how much money he had. Bernard replied that he only had a little bit of cash on him and no money in the bank. This did not satisfy the men, who insisted that they wanted more money. They threatened that, if they searched him and found more money than he said he had on him, they would kill him. What was apparent by now was that these were not police officers and that the man sitting next to him was actually in cahoots with the other two. He was told to search Bernard and found R800 in his wallet. They produced a short, white knife and told him to take off his pants. He was searched again, and they found R 1 400 that Bernard had hidden in his shorts.

The men drove to the Alldays road and told Bernard that they were going to kill him. The doors were locked, so Bernard had no way to escape. About 15km further on this road, the driver made a U-turn and stopped the car. Bernard was ordered to get out and to climb over a barbed-wire fence, into an unknown farm. When Bernard was on the other side of the fence, the car sped off.

They had not only taken all his money, but also his two bags of luggage, his wallet with all his cards and cellphone with all his contacts.

Bernard climbed back over the fence, cutting his hands on the barbed wire, and started to walk back to the N1. A few minutes later, he saw a police van approaching and tried to stop it by waving his bloody hands, but the police just sped past him. After a while, a private car heading back to Louis Trichardt stopped and the driver offered to drop him off at the Louis Trichardt Police Station.

Bernard reported the incident to the police and sadly accepted that he would not see his family this year after all, but after he had spoken to his son and explained what had happened, his children sent him money. He set off for his journey back home for the second time the next day (20 December), using public transportation this time.

Bernard said that this was an eye-opener for him. He realised that hitchhiking is just not safe anymore, and he urges people to rather make use of public transportation.

Denise van Bergen joined the Zoutpansberger/Limpopo Mirror in November 2020. She has previous experience as a journalist working for Die Pos in Modimolle.