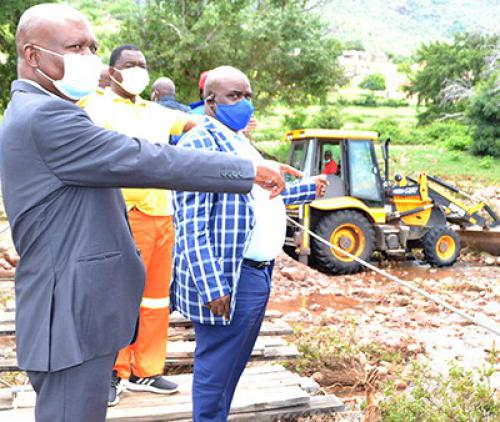 The executive mayor of the VDM, Cllr Dowelani Nenguda (left), and Makhado municipality's mayor, Cllr Samuel Munyai ( right), stand on the damaged makeshift pedestrian cable bridge at Sane village, pointing to the damage caused when the Mufongodi River overflowed a fortnight ago.

The executive mayor of the Vhembe District Municipality, Cllr Dowelani Nenguda, assured residents of Sane that the disaster management team, in conjunction with the Department of Roads and Infrastructure, would work around the clock to re-construct the Sane bridge, as well as the pedestrian makeshift cable bridge.

These bridges, which link Sane village to its sub-village, Sane-Natalia, were sw

ept away by heavy rains and floods recently. The Mufongodi River also overflowed.

Nenguda, accompanied by Makhado Municipal Mayor Samuel Munyai and other councillors, visited Sane village on Thursday, 11 February. He was pleased to hear that proceedings were well underway for the funeral service of the 73-year-old Mr Simon Ratshilumela, a sickly pensioner who died last week after an ambulance could not access the village.

“We are here as the district command council to assess the damage caused by the flood waters,” Nenguda said. “The contractor is on site, working hard to reconstruct the bridge, and we want the makeshift pedestrian bridge ready to be crossed for the funeral service (for Ratshilumela) over the weekend.”

The traditional leader of Sane village, Headman Matodzi Nesane, welcomed the Vhembe District Municipality’s visit. “We have suffered a lot due to the heavy rains and floods. We were cut off from other villages and sections and worried that no-one from the government would come and look at the bad state of our roads and bridges. But we are consoled and believe that their visit will mean something good for us,” Nesane said.

Ms Ndivhuwo Ratshilumela, the family spokesperson for Ratshilumela, said that the mayor and his entourage had left them with hope that they would be able to offer their father a proper burial.

She also thanked the various media representatives for the role they had played since the sub-section of Sane-Natalia had been cut off from other communities by informing the communities and government about the bad state of their roads and bridges.