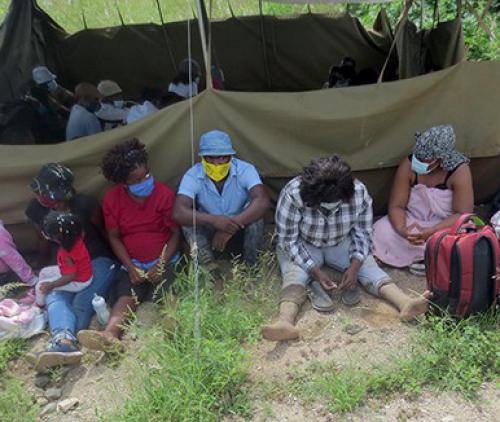 Border jumpers intercepted by the SANDF on 15 February at the Beitbridge Border post were held and questioned at a tent set up in the bush at the back of a truck stop.

Border jumpers say they have no other choice

The Deputy Minister of Home Affairs, Njabulo Nzuza, who visited the Beitbridge Border Post on 15 February to witness the state of preparedness, praised members of the SANDF for their successful efforts in protecting the border. He visited the border post shortly after 20 border jumpers were intercepted.

“Keep up the good work you are doing. We want to make sure we cover every possible route they use to enter the country,” Nzuza said.

These illegal entrants, however, say that the Zimbabwean borders have not yet been re-opened and that sneaking into South Africa to buy products for re-selling in Zimbabwe was their only hope of survival. If they did not, they said, their families would starve to death.

Angeline*, a Zimbabwean woman, was among the group of border jumpers who were intercepted. They were trying to enter South Africa on 15 February through illegal routes. The border jumpers were sitting in an SANDF tent erected only a few metres into the bush next to the Limpopo truck stop when Limpopo Mirror’s journalist arrived to investigate.

“It is not that I love border jumping, but there is no way I can leave my children to die of hunger. Since the borders were closed, life back home (in Zimbabwe) has been really bad. The only way possible is to come into the country (South Africa) to buy goods for re-sale back home,” Angeline told Limpopo Mirror. She is a mother of three and her husband is unemployed.

“If the borders are opened, I will come through the legal route, but Zimbabwe has not announced when the borders will be opened again,” she said.

Another apprehended entrant, who was sitting next to two green fuel containers, also said that coming to South Africa to buy fuel for re-sale in Zimbabwe was his only means of living. His face was bruised. When the journalist asked what had happened to him, the 38-year-old man replied, “I have been living on selling fuel in Zimbabwe for a long time, but today my luck ran out as I ran into SANDF members. I don’t know what else to do.”