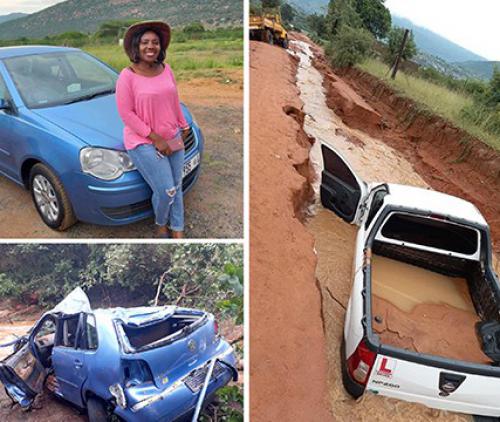 The past week’s heavy rains claimed at least one life and left serious damage to roads and bridges in the Nzhelele valley.

The police in Vhulaudzi in Nzhelele have reported that a 37-year-old woman died after she was swept away by floodwater. The deceased was a resident of Vuvha village and the incident apparently happened early on Monday morning. The woman transported her child to the Tshedza main road from where the girl would catch another means of transport to school.

According to the police report the woman returned home, but on her way back found that the road was blocked by the flooding Mudzinga river, which is crossing Tshedza village. “She apparently attempted to cross, but her vehicle was swept away,” the police spokesperson said.

The report further states that the incident was noticed by passengers being transported on a truck used to deliver sand. The passengers alerted the police.

“Members of the South African Police Service’s Search and Rescue Team were notified and on arrival, the deceased’s vehicle was found trapped in tree trunks on the banks of the river. Her body was retrieved at a distance of about three kilometres from her vehicle,” the police report states.

The police issued a warning to residents to be wary of crossing rivers via low-level bridges, especially when these are covered with water, as it is almost impossible to gauge the depth of the water.

Still in Nzhelele the main access road that links Dopeni, Shanzha village and Tshivhilidulu village was also washed away by the raging storm water. The road is mainly used by buses, ambulances, police vehicles and private transport.

One of the people who uses the road on a daily basis, Mr Phathutshedzo Ramabulana, pleaded with the local government structures to fix the road fast. “We don’t know when we will need emergency services,” he said.

“We use this road all the time and it is the only road that we use to go to Tshivhidulu,” he said. “We don't know what will happen when we urgently need the police or an ambulance, hence we are pleading with our government to fix this road immediately.”

In a photo being circulated on social media, a white Nissan NP200 bakkie can be seen stuck on the same road. Mashudu Mulaudzi, the driver of the bakkie, said his vehicle was parked when the flood water washed it into the Tshivhiludulu gravel road.

“I cannot put the blame on anyone as this is a natural disaster, but I will be very happy if the road is fixed soon so that our lives can go on,” he said.

Other roads that were damaged by the storm water include the Mudunungu-Milaboni tar road, the Rabali bridge on the R523, the Mphephu resort bridge, the Siloam via Eskom gravel road and  the Netangula crossing that serves as a main access point to Tshirenzheneni village.