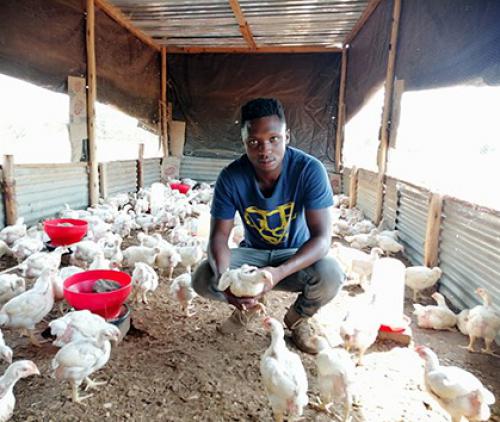 Thabang Makavhe from Musina is determined to make a success of his poultry enterprise.

A 25-year-old Musina resident, Thabang Makavhe, literally lives the meaning of his name - “maintaining a happier lifestyle” – in spite of hard times.

Makavhe started a poultry farm after he had struggled with unemployment for many years. He registered his business initiative as Makavhe Enterprise in January 2019 and started operating at Harper Mine in Musina.

“I was determined to become an entrepreneur because of the lack of employment,” he said. “I made it a priority to start something that would give me money and also benefit the community when I employ other residents.”

He already had first-hand experience in bird farming, since he had started taking care of indigenous chicken at his home years before. “I always had a zeal to venture into poultry farming since 2013, when I was in Grade 11,” he said. “I had the ambition even then to set up a big poultry farm where I would supply chickens to major supermarket chains. I started out by being a photographer and selling clothes and handbags to people, and it all helped me to raise funds to start my poultry farming,” he said. “I found myself without enough money and I had to sell my laptop to add to the limited funds that I had raised.”

At the start, he had to deal with some setup challenges. He approached people who had experience in poultry farming and asked for more information on the trade. “They were willing to offer information and knowledge at no cost, and I felt really lucky,” he said. “As I started out, some people tried to discourage me. Some began to call me I was crazy, but I never listened to them because I knew what I wanted, and I was hungry to see my idea turn into reality.”

Makavhe managed to employ the services of two permanent workers and one part-time worker, because he believes in community building. “I want to work very hard, so that I can employ more people from my community,” he said. “I would also like to advise fellow youths to never give up on their dreams. You must fight for what you want when you are young.”