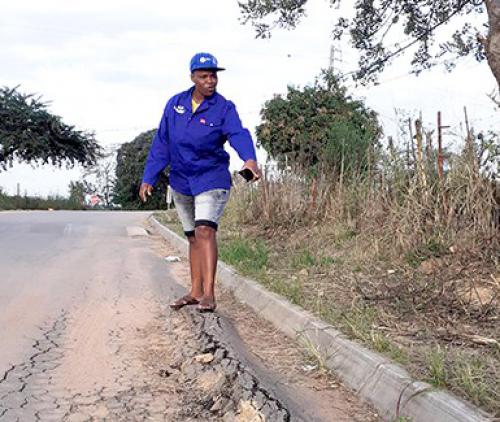 Ms Glenda Furumela, DA councillor in Makhado Municipality, stands on a part of the damaged tarred surface of the Xitacini to Jiweni Access Road.

Cracks on the surface, disfigured humps, swollen surfaces, and gaping potholes on the Xitacini to Jiweni Access Road, where Phases 1 and 2 were completed between 2017 and 2020, suggest shoddy work by the contractor, and residents at Valdezia are deeply concerned about it.

The Democratic Alliance (DA) in Limpopo joined the residents’ cry of dissatisfaction and elevated the matter to the Makhado Municipality’s acting municipal manager, Mr KM Nemaname, to register their concern over the quality of work done.

The Valdezia Xitacini to Jiweni Access Road was funded via a Municipal Infrastructure Grant (MIG). In the 2019/2020 financial year R1,1 million was allocated to complete Phase 2 and R6,1 million for Phase 2. A further R18,4 million is allocated for Phase 3 in the 2020/2021 financial year.

“The DA has previously raised the matter with the municipality’s Director of Technical Services, where we highlighted our serious concerns over the quality of workmanship, the current condition of the road and the use of the same engineers for Phase 3 that is currently underway,” said a DA councillor in the Makhado Municipality, Ms Glenda Furumela.

She added that, looking at the magnitude of the mess done by the contractor and the municipality’s continued disregard for complaints, the DA have also approached the Public Protector over the matter.

“The response outlined some information from the report of the municipality, including that the road may be under-designed and that the municipality had been requested to provide specifications, design report, drawings and full test results,” she said.

Furumela said that it is unacceptable that the road, which is being built at a considerable cost to the municipality, is in such a shocking state so soon after construction. “The people utilising the road deserve a good, quality road and the DA will continue to raise concerns until they are addressed,” she said.

When contacted to find out if he knew about the problem, Ward 31’s Cllr Sipho Masuka said that the municipality was handling the matter and should be given enough time to attend to the issue of the road in line with applicable legislation regarding projects.

“I am satisfied with the work of our municipality’s technical services,” he said. “In their simplified explanation to me regarding the tar road project at Valdezia, they said that they are busy with the matter with the consultant and the contractor. Noting that, had it not been for the continuous rain the previous months in our community, the defects liability activities would have started on the affected parts of the road. It's a shame to see the so-called DA trying to hijack the road issue for their narrow, selfish, misplaced political agenda.”

Makhado Municipality’s spokesperson, Mr Louis Bobodi, said that the project had been completed in 2017 and was currently on a maintenance program.

“The municipality is aware of the damages on the road, which were caused by lack of concrete side drains which are meant for storm water management along the road,” Bobodi said. “This is causing damages in some sections of the road. The road will be fixed as part of the maintenance programme.”

He said that all test results conducted during construction stage complied with standard specifications. “The formation of potholes on the road surface led to the ingression of water beneath the layer, and the layers became weak. Then the road deteriorated as a result of the recent heavy rain,” he said. “It is important to note that defects were identified after completion of the project when the project was in the Defects Liability Period. The contractor is currently in the process of going back to site to fix all damages.”

He added that the engineer was not appointed for a particular phase of the project, but that the appointment was for the entire project. “The municipality implements the project in phases, whereas contractors are appointed per each phase,” he said.

Neckmay Trading Enterprises was assigned for Phase 2 project, and the company’s CEO, Mr Thomas Shavhani, said that they had not neglected or abandoned the project. “You will remember that the lockdown was announced last year when we were still busy on the project and now the heavy rains fell, which all contributed to some defects on the project,” he said. “We are aware of the defects, and as we speak, we are on the site working on addressing those defects. There’s no way that we can run away; even the municipality still owes us as part of the defects period.”

Both Tshiamiso Trading 135 and PGN Civils (Pty) Ltd, who were assigned for Phases 1 and 3, were not readily available for comments. Dikgabo Consulting Engineers were contacted and said that they had the very same information that they had supplied to the Makhado Municipality, which was what Bobodi provided to Limpopo Mirror.