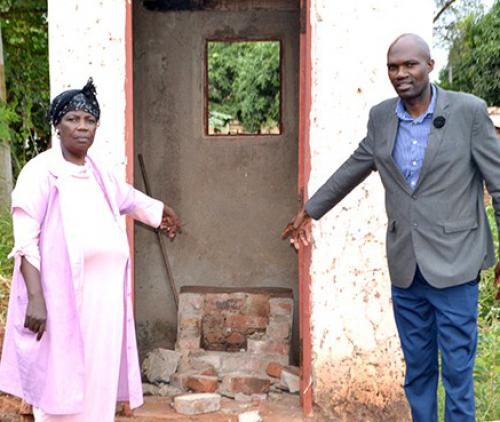 Flociah Ramutumbu (left) and Collen Siaga (right), photographed at the pit latrine into which a new-born baby had been dumped. Photo: Silas Nduvheni.

The baby girl dumped in a pit toilet last week is recovering at Tshilidzini Hospital. She is currently in the care of nurses there. The mother, who had allegedly thrown her into the toilet, remains in custody.

The baby was discovered last Friday at Maniini Block M just outside Thohoyandou by Ms Flociah Ramutumbu. She said that she was about to use her outside pit latrine that morning at about 06:45 when she heard something that sounded to her like a new-born baby crying. The door of her toilet was closed.

“I immediately called the neighbours to come and see what was happening. I was surprised when one of the young girls who stayed near me quickly responded by saying that it might be a cat and offered to come with a stick to attack it. But to myself, I kept suspecting the sound was that of a baby,” Ramutumbu said.

“I nearly fainted when we opened the door of the toilet and found that it was a newborn baby, dumped in my toilet. My young girls were not pregnant; I would have suspected if they were. We then called the emergency medical services, who quickly arrived and swiftly took the child out of the toilet. We thank God that the baby was found alive,” she said.

The incident so traumatized Ramutumbu and the family members that none of them want to use that toilet anymore. A Good Samaritan from their community offered to help the family build a new toilet.

Mr Collen Siaga, a relative of the Ramutumbu family, who was also called to come to the house, said he was still saddened by the incident and urged young girls to stop throwing their babies away. “Our government today has child-support grants, so what is the reason why young girls who have given birth dump their children? Children are a gift from God, and we have to raise them with care. They are our future leaders,” said Siaga.

Limpopo police spokesperson Brig Motlafela Mojapelo confirmed that a young woman had been arrested after the baby had been found. He said that the police had started to make inquiries about girls or women in that village who had been pregnant over the past few months.

The 23-year-old Hope Netshiozwi, a neighbour of Ms Ramutumbu’s, was arrested in connection with the incident and she appeared in the Thohoyandou Magistrate’s Court on Monday, 3 May. She is accused of dumping her new-born baby in her neighbours’ pit latrine on Thursday night. She faces a charge of concealment of birth. Her case was postponed to 6 July for further police investigation, and she remains in custody.