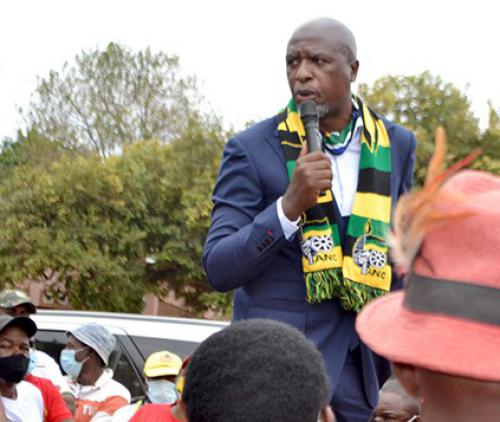 The ANC provincial secretary, Soviet Lekganyane, addressed the people outside the Thohoyandou Magistrate's Court on Friday during the trial of the three men accused of the murder of the two SAMWU officials. Photo: Silas Nduvheni.

Three accused in SAMWU murder case together in court

The three men charged with the murders of the two SAMWU officials in 2019, appeared together in the Thohoyandou Magistrate’s Court for the first time on Friday, 30 April.

The two brothers, Simon (26) and Percy Radzuma (33), were arrested on Friday, 19 March this year in Rwanda village in the Letsitele policing area outside Tzaneen for the possession of unlicensed firearms and ammunition. They were later linked to the murder of SAMWU member Ronald Mani (50) and the union’s former acting National President, Mr Timpson Musetsho (50), in 2019. Their co-accused, Thabo Sibanze, a resident of Eswatini (formerly Swaziland), was arrested in 2019, first on charges of intimidation of some of the SAMWU officials in Vhembe, and later also in connection with the murder of Ronald Mani.

The two union members were apparently very outspoken against municipalities in the Vhembe District that had invested millions of rands of public funds in the now-liquidated VBS Mutual Bank. Musetsho was shot while parking his motor vehicle in his garage at Makwarela Extension, near Lufule village. He was admitted to hospital but died a few days later. On 30 January 2019, Ronald Mani was shot dead at the Singo Bottle Store in Itsani village.

According to provincial police spokesperson Brig Motlafela Mojapelo, the suspects were also linked to several other charges, including robberies, theft and murder that happened in the district over the past three years.

The court was again filled to capacity and some spectators were forced to stand outside during the court proceedings, while others chanted and sang freedom songs in remembrance of the victims.

The ANC provincial secretary in Limpopo, Soviet Lekganyane, thanked the gathering outside the court for their support of the families. “We are happy that the hitmen had been arrested. The police must not feel threatened for arresting them, even if they are ANC members. If they are guilty of the killings, they must be brought to justice,” said Lekganyane.

“We want everyone behind the killing of our comrades in court. We suspect that it was politically motivated, and we want the ‘big fish’, those who hired the hitmen, arrested by the police too,” said Lekganyane.

Representing the two victims’ families, Mr Lucky Mani said that, although they were still heartbroken about the incidents, they felt comforted and hoped that justice would be served and according to what the guilty parties deserved.

“We are also happy that, with the support of the people, we are slowly healing from our sorrows. Now there is light at the end of this case. We hope that they will face the might of the law,” Mani said outside the court buildings.

The cases were postponed to 28 May after the prosecution authority argued that their cases be centralised in one single court. All three accused were remanded in custody.

The court also heard that Ndivhuwo Radzuma, the elder brother of two of the accused, was arrested in connection with other murders and was now also linked to the murder of Mani and Musetsho. He will join the other three during their next court appearance.