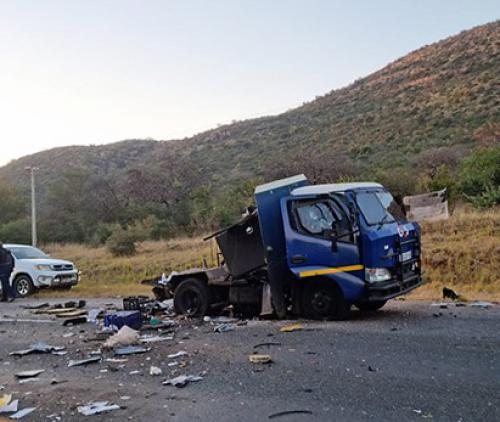 A motorist send in this photo of the CIT vehicle involved in this afternoons cash-in-transit heist. Photo supplied.

A violent shootout occurred between cash-in-transit (CIT) robbers and security guards on the N1 north between Louis Trichardt and the border town of Musina near the Waterpoort turn-off at Wylliespoort this afternoon, 21 May.

In the absence of an official police report, reports from the scene indicate that a group of heavily armed men ambushed and robbed a CIT vehicle. Although not confirmed, explosives were used to blow up the CIT vehicle.

“There are big problems here. I am going to turn around. There are shots being fired around me. Please be careful!” was the voice note received from one motorist. In another voice note he adds: “Three cars passed me shooting with AK 47’s.”

Shortly after the incident, notices started circulating warning residents to be on the lookout for an old Mercedes Benz, a white BMW Series 3 with GP registration and a Toyota Hilux. The last vehicle was seen travelling in the direction of Louis Trichardt.

By the time of going to press, the police had yet to respond to media enquiries or issue an official response. It is not sure if there was any fatalities suffered during the incident. The amount of money stolen, if any, was still unknown.