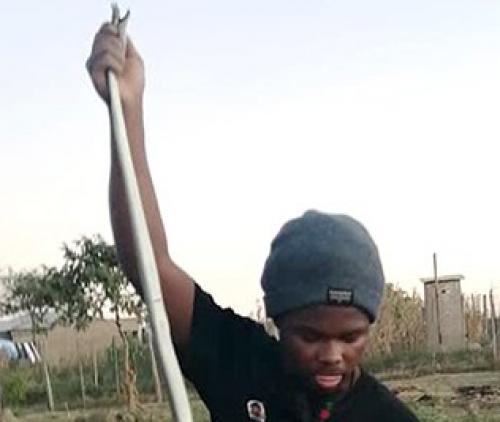 Vleifontein's own 'snake catcher' wants to preserve these reptiles

The hostility between humans and snakes dates back thousands of years, as far as biblical times when Adam and Eve’s perfect live in the Garden of Eden was suddenly turned upside down, no thanks to the snake.

In African cultures, snakes are generally associated with witchcraft – a fact that does not improve the already frayed relationship between our two species. However, within a certain African community in Vleifontein lives a man who regards himself as the exception to this cultural belief. In fact, Denzel Ncube’s fondness for these slithering reptiles is no secret.

He was found playing with a big snake at the back of his parents’ home in Protea Glen when he was only two years old, and since then his love for snakes and other animals has grown into a passion, which Ncube is eager to turn into a full-fledged career very soon.

He has successfully completed the African Reptiles and Venom courses in advanced Snake Handling, as well as Snake ID, Snakebite Treatment and Venomous Snake Handling through FGASA (Field Guides Association of Southern Africa). This, under the mentorship of Mike Perry from FGASA, has opened new doors for him. He also applied for his Catch and Release permit from the Department of Nature Conservation.

Ncube gives back to his community by educating the local people on the dangers as well as the beauty of snakes and what to do when confronted with them. He said he would really like to build a snake park one day, where people could have a good look at the many different types of snakes.

“I am determined to make it in this field which has, until more recent years, been regarded as a white domain,” Ncube said. “I will climb the ladder of my success without losing enthusiasm. Though it may be hard, I will get there no matter what.”

He makes an appeal to communities to not kill snakes when they encounter them as snakes are there to protect the biodiversity and ecosystem.

Anyone who needs assistance with snakes or wants to know more about snakes can contact Ncube at Tel 067 798 9761, or email him to senzangakhonadenzel@gmail.com. Look him up on his Facebook pages (Rescue Master DEE or Senzangakhona Denzel Ncube).