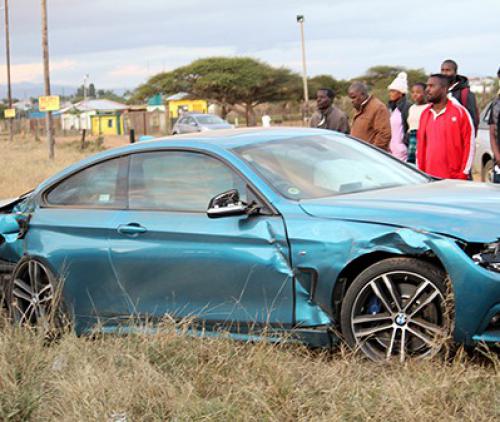 Bystanders look at the wreck of the BMW that hit two learners before crashing into an electricity pole. Photo: Kaizer Nengovhela.

Two Grade 9 pupils of Sinthumule High were knocked down by a vehicle on Tuesday at Ramantsha. One died shortly after being admitted to hospital and the other is still in critical condition.

Zwavhudi Mudau (14) of Gogobole died at Louis Trichardt Memorial Hospital a few hours after the incident. The other girl, the 13-year-old Thikhedzoi Mavhunga, was transferred to the Polokwane Provincial Hospital. At the time of our going to press, she was still in a critical condition.

An eyewitness claimed that two cars had been involved in a race at a spot where the speed limit was 60 km/h. The driver of one of the speeding cars is alleged to have lost control and ploughed into a group of pupils, after which it hit an electricity pole. The driver of the other car is believed to have fled the scene.

Ms Francinah Masiwana, aunt of the deceased, said that the family members were still in a state of shock. “It is only God who knows why it happened like this. It is very painful to lose people like this,” she said.

Vhamusanda Vho-Mbulaheni Ramabulana, representing the Sinthumule Traditional Council, described the incident as a tragedy. He said hearing that children had been knocked over by a car so close to a school was devastating. He said he had been complaining about speeding vehicles in the area for some time now. “We are greatly saddened that innocent lives had to be lost this way. We just hope the government will hear our plight and erect speed humps as motorists are speeding beyond the stipulated 60 km/h,” he said.

The MEC for the Limpopo Department of Education, Bonny Boshielo, said that the department was saddened by the incident. She expressed condolences to the bereaved family and wished the injured a speedy recovery. “We will, as a matter of urgency, dispatch a team of professionals to the school to give counselling to the school as the kids were traumatised,” she said.

Limpopo police spokesperson Brig Motlafela Mojapelo urged motorists to be extra cautious when driving. He condemned any form of reckless driving, especially speeding by drivers along the roads in and around schools. “The cause of this accident is still not clear at this stage, and investigations are still continuing,” said Mojapelo. A case of reckless driving and culpable homicide has been opened.