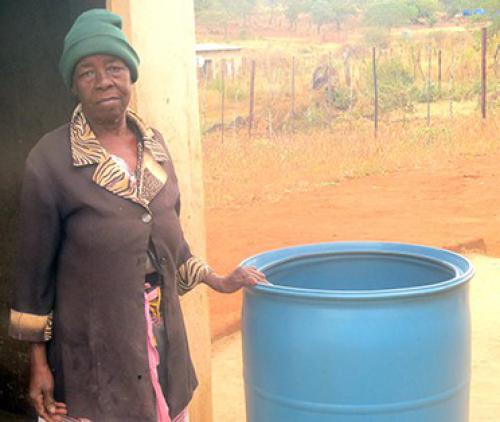 Magi Kutama, who lives on the western side of the mountain at Vuu village, shows the drum she has to fill with water nearly every day. She buys water from people who have boreholes. Photo: Bernard Chiguvare.

The community of Vuu, a village in the Collins Chabane Municipality, is concerned about the water project in their area that was abandoned in 2020. The project was meant to assist the community members, who currently have to pay excessive prices to buy water or walk long distances to fetch some.

The Vhembe District Municipality (VDM) allocated almost R30 million to the Vuu Water Supply Internal Water Reticulation project in 2018. The contractor, HTE Construction, was supposed to start on 10 April the same year. Initially expected to be completed in April 2019, the deadline was later extended to August 2019. According to the VDM, the extension was due to protests in the Vuwani area.

Spokesperson for the VDM Mr Matodzi Ralushai confirmed that the contractor had completed his scope of work on 15 January 2021. “We were so happy that we were going have water taps at our doorsteps, but the dream never came true,” said Vhafuwi Thavhapamupfa. He added that communal taps had been installed at the village in 2018, but they have never had any water. “What also worries me is that, instead of installing water taps to every household, the contractor decided to install communal taps, which was not the agreement,” said Thavhapamupfa.

According to the VDM, the reason that no water is available is because the bulk line from Nandoni Dam has not been completed yet. Nandoni dam is the main water source for Vuu, and the incomplete project has been reported to the Department of Water Affairs, as it is their responsibility.

When Limpopo Mirror visited the area last week, children were pushing wheelbarrows to fetch water at an illegally connected water point. Unfortunately for them, no water was running at the point that day. Green painted communal water taps can be found around the village, but not a drop of water. Here and there, pipes have been dug into the ground, indicating that work is still in progress and not completed. “We have no other option but to buy water,” said Walter Singo, one of the community members.

Vuu village is divided by a mountain into two areas. No water taps are found on the western side although, according to the chief, the project was supposed to provide taps to the whole of Vuu village.

Magi Kutama (78), who lives on the western side, showed this newspaper’s correspondent the containers she fills daily. “I have lived here for more than 10 years, and I buy water every day. I have to use my social grant money to buy water, yet access to water is supposed to be our ‘basic right’.”

VDM promised that the water issue would be resolved once projects in other areas that needed Water Affairs’ attention had been completed.