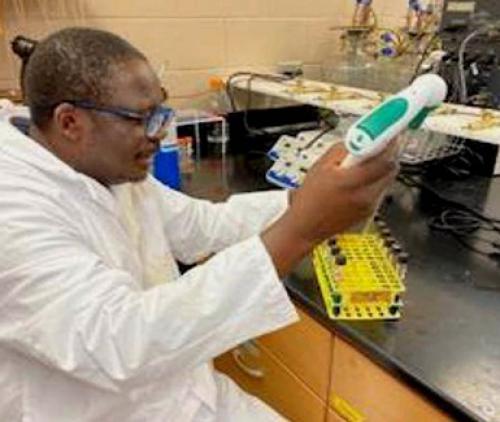 Dr Joseph Baloyi at the research laboratory in the US. Picture supplied.

Univen's Dr Baloyi off to United States on Fulbright Scholarship

The Louis Trichardt-based Dr Joseph Baloyi (58), attached to the University of Venda (Univen) as associate professor in animal science, is on a Fulbright Scholarship at the University of Georgia (UGA) in Athens, Georgia, in the United States.

Baloyi said that the Fulbright Scholarship enabled him to interact with fellow animal nutritionists in the developed world, particularly the UGA grounds. It would further help him improve his research skills and output in the animal nutrition field with his students back at Univen.

“Our research approaches are not the same,” he said. “At Univen, we are still doing more traditional and applied research, while at UGA they do basic research that uncovers animal science.”

Baloyi, who was warmly welcomed by his UGA host, Dr Todd Riley Callaway, a Ruminant nutritionist in the Department of Animal and Dairy Science, has already been involved in some research projects. He joined in some of the research that Dr Callaway was doing with his students.

“Dr Callaway has a well-equipped laboratory,” he explained. “He is working mostly on microbiology in the animal gut as it is affected by feeds. His research approach is close to what I intended to do, but much more detailed than my proposal.”

Before the recent university restructuring from schools to faculties at Univen, he was the Vice-Dean of the School of Agriculture. Now he is the head of department and associate professor of animal science. “I am involved in the administration of the department and teach undergraduate students,” he said. “I teach animal nutrition and animal production courses. I also supervise senior undergraduates (fourth-years), MSc and promote PhD student research projects.”

His main research interests with both the senior undergraduate and the postgraduate students lie in animal nutrition, particularly evaluating forages, browsing and agricultural by-products as potential supplementary feeds in the dry season for livestock.

“During the dry season, the natural pastures decline in both quantity and quality, and this is the main challenge of animal production in the tropics,” he said. “Animals lose weight in the dry season and productivity drops significantly.”

He said that he would encourage other professors and even students to apply for the Fulbright Program because they could learn and experience a lot when on a US Fulbright Scholarship.

“We have different teaching and research approaches to animal science,” he said. “Here at UGA, they are looking at basic scientific explanations of what is happening to the feeds in the animal gut. Unlike us at our African institutions, at UGA they have the equipment and facilities to do deeper scientific research. Collaborative exchanges, be it staff or students, will expose you to the up-to-date technology.”

According to the Minister Counsellor for Public Affairs at the US Embassy, Frank Whitaker, the Fulbright South African Research Scholar Program is a fully funded opportunity for South African university-faculty or research-institute professionals to conduct research and teach in their field of expertise at an academic or research institution in the United States for a period of three to nine months with the intention of strengthening academic programmes and expanding the US/SA higher-education network. This programme forms part of the range of Fulbright scholarship opportunities available for South African students and academics. Since 1953, more than 2 100 South African students and scholars have pursued studies and research in the United States through the Fulbright programme.

“Small-scale and subsistence farming often supports the livelihood of communities, and we believe the results of Dr Baloyi's research may significantly contribute to the quality and health of livestock in Thohoyandou and beyond,” Frank Whitaker said. “Dr Baloyi’s experience and research will also broaden the exposure of his students at the University of Venda, which will certainly impact the depth of their academic and practical experience as future agricultural scientists."

The Fulbright programme currently operates in South Africa and more than 150 other countries worldwide. For more information, please visit www.za.usembassy.gov/fulbright.