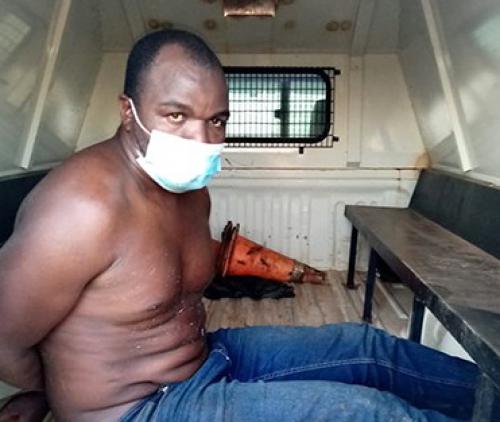 A 36-year-old father from the rural village of Matavhela near Mafukani, outside Thohoyandou, briefly appeared in the Mutale Magistrate’s Court on Monday, 6 September, on charges of murder after he had allegedly brutally murdered his three-year-old daughter with a hammer on Thursday, 2 September.

The accused, Mulalo Mathegu, reportedly went berserk after a disagreement regarding the child between himself and the child’s mother.

The great-grandmother of the child, Vho-Munzhedzi Radzabo, who lives in Dzwerani-Mvelaphanda in the Vuwani area and took care of the child, said that Mathegu came to them on the evening of Wednesday, 1 September, and asked if he could take the child for a few days to visit him at his house. “We never suspected anything wrong, as he was a loving and caring father to his child. He usually came here and asked for the child to visit him for a few days, and he normally returned her without trouble. We didn’t know that the mother didn’t want to let the child go to her father, and that the two were fighting,” said Radzabo.

Another source, who wished to remain anonymous, told the media that Mathegu took the child that night to his home village of Matavhela. In the early hours of the next morning (Thursday), he allegedly phoned and sent WhatsApp messages out to family members and some of his friends, telling them that he intended to kill the child and then kill himself too.

The source said that Mathegu drove the child in his car to the Tshamutora Mountains near Gundani village, a few kilometres from Matavhela village, where he allegedly took a hammer and hit the child over the head with it. He then put her dead body in the boot of his car and tied a rope to a nearby tree to hang himself. However, before he could kill himself, community members and the police, who had by then been hunting for him, arrived at the scene. Mathegu ran from them, but they pursued him.

According to the source, the angry father acted “like he was possessed by an evil spirit”, getting violent and later injuring a police sergeant. Another police officer shot him in the leg before they were able to arrest him with the help of the large number of community members from around Matavhela, Mufulwi and Mafukani villages.

Limpopo police spokesperson Brigadier Motlafela Mojapelo confirmed the incident and said the police in Mutale were investigating a case of murder.

The petty headman of Matavhela village, Vhakoma Mashudu Shandukani, could hardly believe what had happened. Mathegu was described as a cool and collected person who always took good care of his child.

Mathegu’s case was postponed to 14 September for a formal bail application, and he was remanded in custody.

The little girl, Kharendwe Mathegu, was buried during an emotional funeral service on Saturday, 4 September, in Dzwerani-Mvelaphanda village’s cemetery.