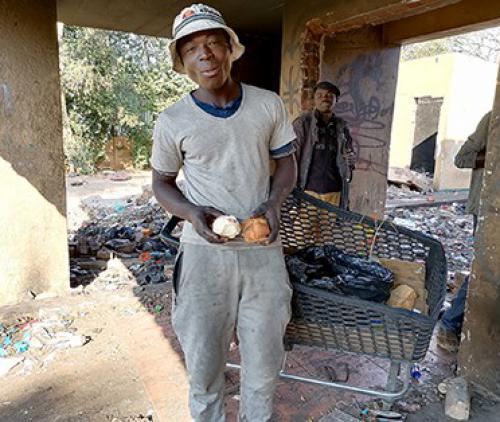 Godknows Wemba, one of the 13 homeless Zimbabweans who occupy an empty, dilapidated house in Louis Trichardt town, returned "home" from one of their popular scavenging areas - a bin next to Spar - with a black plastic bag containing bread and buns. Photo: Bernard Chiguvare.

Thirteen homeless Zimbabweans who occupy an empty, dilapidated, roofless house in President Street in Louis Trichardt’s CBD complain that they are rarely able to take a bath because of the erratic water supply in town.

Not having access to the water or electricity supply at the house they live (illegally, because they have nowhere else to go), they depend on neighbours’ taps or sometimes fetch water from a communal tap at the taxi rank. But when all the taps run dry, they are forced to skip bathing - even washing their hands. With the current lack of water in town, they now bath only twice a month, at most. They do not even have water containers to store water for these unforeseen dry spells.

Limpopo Mirror recently visited these destitute people at the house.

“It is already 08:00. I am hungry and tired. Yesterday I walked far in search of a casual job and scavenging for food in bins,” said Innocent Katurure (19), one of the 13 occupants who live in the house. “Our major challenge is to wash ourselves. Sometimes the water only comes back on at night. We cannot walk to the nearest house seeking for water then, and by morning the taps may have gone dry again,” said Katurure. Katurure has been in South Africa since 2019, but wishes to reunite with his mother in Zimbabwe.

Fellow occupant Godknows Wemba (19) returned from their favourite scavenging spot, a bin next to Spar. He had a black plastic bag, a quarter full of bread and buns. “It is now a common practice that we wake up and just rush out to scavenge for food and water. Though we should bath regularly, we are unable to,” said Wemba.

Wemba is from Masvingo. His parents died when he was still very young. He was in the care of relatives but claims they neglected to let him go to school and did not feed him properly. “I am sure my relatives believe I am dead because I never informed anyone of my journey to South Africa. Now I feel like calling them, but I do not have any of their contacts,” said Wemba while he munched on some buns.

Matodzi Ralushai, Vhembe District Municipality’s spokesperson, confirmed that Louis Trichardt CBD was experiencing water shortages. “Louis Trichardt’s residential sections, Tshikota and central business district have been experiencing water shortages due to the Albasini water scheme’s ageing infrastructure, which has been under constant maintenance. The completion of the Mowkop project that is currently in progress will be a solution to the problem,” said Ralushai.