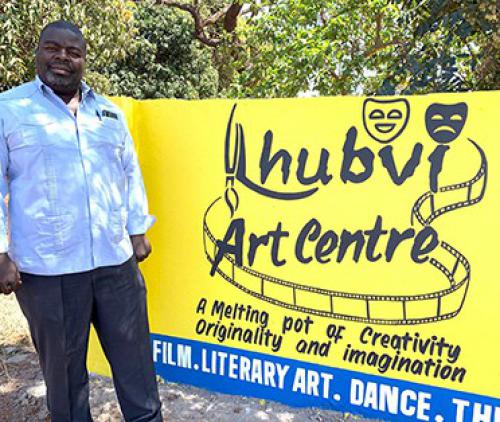 Rudzani Ramugumo of the Limpopo Heritage Resources Agency (LIHRA) at the entrance of the newly established art centre in Khubvi village. Photo supplied.

This year’s Heritage Day celebration came with a special gift for the community of Khubvi and surrounding villages as a new, vibrant platform for nurturing and developing creative art talents was officially launched.

Guests, artists, and community members gathered at the old agricultural offices on 24 September to witness the birth of the Khubvi Arts Centre. The Department of Agriculture and Rural Development consented to the conversion of their old offices at Khubvi village, which had been lying unused for many years, into a community art-development centre.

Local performers made a boisterous show with powerful performances that showcased the crème de la crème of local talent. Musician Shufflers Ragimana led the charge, serenading the revellers with his popular songs. Veteran reggae artist Kenny Murabi beamed with pride as his daughters, Tsiko and Vusani, wowed the crowd with a performance that confirmed that, indeed, the apple does not fall far from the tree.

Ester Sinyegwe made sure that indigenous performances were on the menu with her group, Tshitivha Youth Organisation, showing how delightful seeing young children embracing their cultural heritage can be. Mashudu Mabidi, one of Khubvi’s finest sons of the soil, was in his element, weaving magic with his gift of the gab and poetic prowess, while hot sensation Khubvi Kid Percy whipped the crowd into a frenzy with his super hit, Thamu.

Chief Thinawanga Randima, who graced the occasion with his presence, expressed his support for the Khubvi Arts Centre, saying he hoped to see the centre contributing to the fight against crime, poverty and other social ills that continue to be the bane of the community. “There is nothing that can stop us from building an art gallery here to display and market the crafts produced by our local artists. This initiative has great potential to facilitate meaningful social and economic development in our community,” Chief Randima said.

The Khubvi Arts Centre will focus on theatre-arts development, music, dancing, literature and heritage programmes. Special emphasis will be placed on harnessing the economic viability of the arts sector with the view of empowering rural communities.

“We are officially open for business now. We are about nation-building and social cohesion. Our job is to curate talent, and we are up to the task,” said Maanda Maumela, an award-winning filmmaker and one of the arts centre’s founding directors.