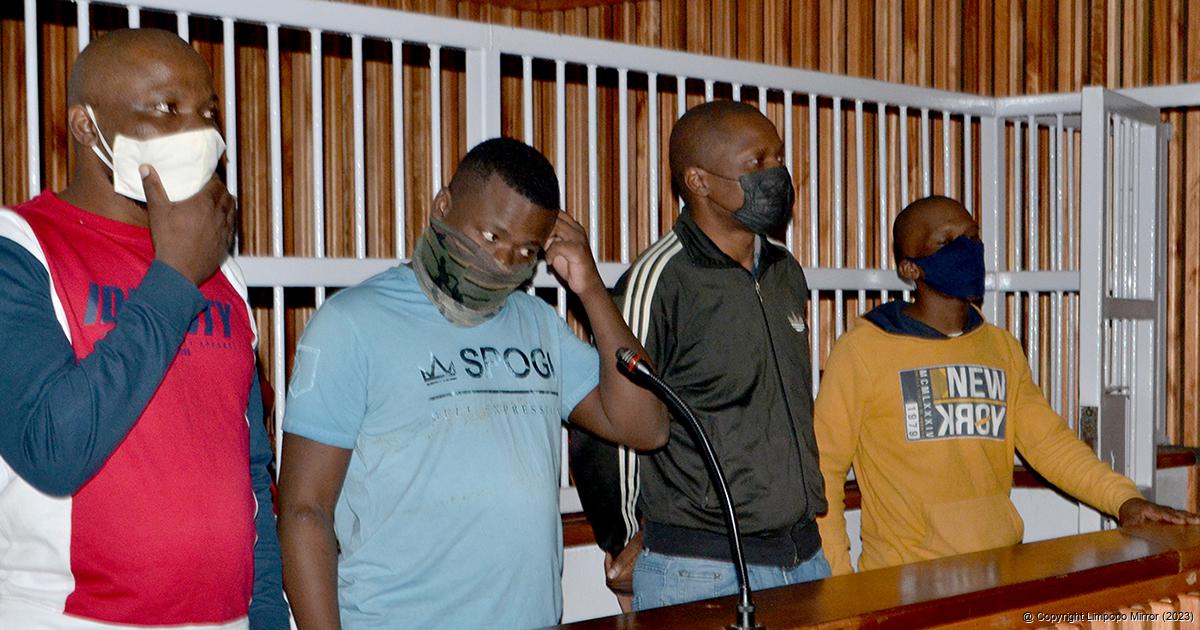 The four men accused of the murder of the late SAMWU officials, Timpson Musetsho and Ronald Mani from the Vhembe District Municipality. From left to right are Percy Radzuma, Simon Radzuma, Nduvhuwo Radzuma and Thabo Sibanze. Photo: Silas Nduvheni.

Some light has finally appeared at the end of the tunnel in the murder case of the two slain SAMWU members, Timpson Musetsho (50) and Ronald Mani (50). This was the message from the provincial secretary of COSATU in Limpopo, Mr Gerald Twala, last Wednesday (27th).

Twala addressed a large group of supporters, including the families of the deceased, who gathered outside the Thohoyandou Magistrate’s Court, that he was convinced that the case could now go to trial.

The three Radzuma brothers, Percy, Simon and Ndivhuwo from the Makwarela Township near Sibasa, and Thabo Sibanze from Eswatini (formerly Swaziland), stand accused of murdering Musetsho and Mani in 2019. The four suspects have been remanded in custody since their first appearance.

The state prosecutor for the Thohoyandou Magistrate’s Court, Ms Mashudu Nekhumbe, read out the decisions of the deputy director of public prosecutions, which stated that the murder case against Thabo Sibanze would be provisionally withdrawn while his other cases continued. He is being prosecuted for being an illegal immigrant from Eswatini, intimidation and being in possession of stolen property. He will be formally charged on 12 August 2022, when the date will be set for his trial at the Sibasa Regional Court to begin.

The magistrate, Ms Shirley Nemutandani, postponed Simon and Percy’s case, as well as Ndivhuwo’s case, to 30 September 2022, when dates will be set for their trials at the Limpopo High Court in Thohoyandou.

Twala was satisfied with this outcome. “We are now convinced that the murder case is progressing well as the suspects will finally go on trial at the High Court. We also want those who hired the hitmen to be arrested and face the might of the law,” he said.

Mr Lucky Mani, who represented the Musetsho and Mani families, was also relieved about the progress in the case and said he hoped that the trial would start very soon.