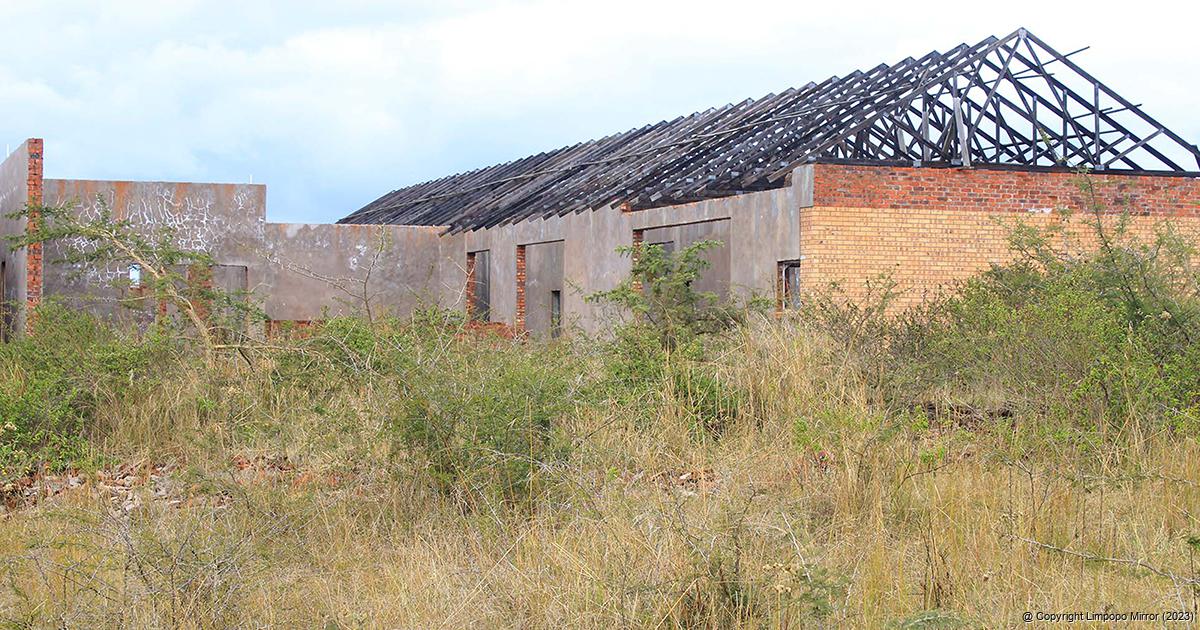 The half-built structures of the old-age home at Maila village are being vandalised and no-one is cutting the grass or doing anything else to maintain the site. Photo: Thembi Siaga.

Long arm of the law grabs a Lotto fraudster

The (very) long arm of the law finally succeeded in apprehending some of the fraudsters who had looted the funds of the National Lotteries Commission (NLC), but for the communities who had had dreams of a better life, little reprieve has been provided.

The funds that were supposed to improve their living conditions had seemingly been squandered long ago, with almost no prospects of getting anything back.

Christopher Tshivule (46) was sentenced to eight years’ imprisonment for fraud involving a R1,575 million grant allocated to a non-profit organisation, The Message. A court found that Tshivule had masterminded the hijacking of this NPO and used it as a vehicle to get the Lotto funding.

Although Tshivule was sentenced in the Palm Ridge Magistrate’s Court, he is from the Vhembe region and the bank account used to syphon off the funds was opened in Louis Trichardt.

He was originally charged with fraud along with his niece, Mukondeleli Tshivule (27), Thomas Ndadza (49) and Fulufhelo Promise Kharivhe (42). But charges against them were dropped after they had made representations to the National Prosecuting Authority (NPA), an NPA spokesperson told Limpopo Mirror.

Both Tshivule and Ndadza, a teacher at Litshovhu High, are from the Madombidzha area, close to Louis Trichardt. Promise Kharivhe’s home address is in Louis Trichardt and her husband, Collin Mukondeleli Tshisimba, is a member of three other non-profit organisations – Make Me Movement, Lethabong Old Age and Mbidzo Development Program – that had received a combined total of R53 million in Lottery funding. The SIU has identified Tshisimba as a key player in the looting of the Lottery.

Tshivule pleaded guilty and said that he had misrepresented himself as the chairperson of The Message. He had applied for funding of R3 million for a “traditional arts festival”. Then, on 8 October 2018, the NLC had paid over R1,575 million into the account of which he, his niece and Ndadza were all signatories.

Nevhutanda is no stranger to the Vhembe area. He served as the NLC’s board chairperson for a period of 11 years until 2020, and he is a former ANC Limpopo chairperson.

At one stage he worked as a lecturer at the Makhado College of Education. He received a PhD in education from Unisa in 2000 and a doctorate in music in 2005. He also claims a controversial professorship, awarded to him by the International Eco-energy Academy of Azerbaijan and refers to himself as “Professor” Alfred Nevhutanda.

The preservation order granted against Nevhutanda and Vhutanda Investments, a private company of which he is the sole director and which owns his luxury mansion in Pretoria, makes for interesting reading.

Also included in the order were five non-profit entities and two private companies, as well as 20 people involved with them. Between them, the non-profits received around R100-million in Lottery grants and they, in turn, directly or indirectly, contributed millions of rands to help pay for Nevhutanda’s lavish home, according to the SIU.

One of the non-profits listed is Mushumo Ushavha Zwanda. This entity received R27,4 million to build an old-age home at Maila village, some 30km southeast of Louis Trichardt.

SIU head Advocate Andy Mothibi told MPs when the unit updated Parliament’s Trade, Industry and Competition Portfolio Committee in March on progress in their investigation into corruption involving Lottery funding that this NPO had been hijacked.

Mothibi did not mention Mushumo Ushavha Zwanda by name when he told MPs that, shortly after the first tranche of R20 million was paid into the NPO’s bank account, R4 million was transferred to attorneys handling a property transaction for a former NLC board member.

The former board member later turned out to be Alfred Nevhutanda, and the money was allegedly used to help pay for his R27-million lavish mansion in Annlin, in Pretoria.

The NLC was alerted to the fact that the NPO had been hijacked, but instead of laying criminal charges, opted to negotiate with the parties involved, Mothibi said. It then allocated more money to the project.

In the preservation order granted on 15 June by Special Tribunal Judge Soma Naidoo, Mushumo Ushavha Zwanda is listed as the 15th respondent. Judge Naidoo also ordered a “review and setting aside” of the decisions by the NLC to grant funding to five non-profits. Two of these NPO’s, WAR RNA and Mushumo Ushavha Zwanda, were involved in projects to build old-age homes in rural areas.

What now for Maila village?

The order effectively means that the projects are on hold and that the NLC’s decision to award the funds is set aside while the investigations continue.

However, work at Maila Village had already been abandoned by the time the tribunal granted the order.

Sadly, for the residents of Maila village, nothing much has happened since construction work at the site stopped in early 2019. Limpopo Mirror first visited the site in December 2019. At that stage, the half-built structures were still intact, with bricks and some building rubble lying around. A year later, the bricks had disappeared and most of the windows were broken. During a visit last month, one could clearly see the site was being vandalised and little chance existed of the project’s being rescued.

But the local community was definitely not looking forward to the project’s being finished either. Since Limpopo Mirror first reported on the story, we have spoken to numerous community leaders and residents from the area. One thing is clear – the community was not consulted and no one we spoke to saw the need for an old-age home.

During our latest visit, one of the senior residents of Maila village, Ms Magret Ringani (72), said she would have preferred a clinic or a primary school, which would have benefited the entire community. “There is no valid reason to have an old-age home here, and the worst part is that we were not even consulted as community members before they started their project,” Ringani said. “For me, going to an old-age home is not an option. I would rather go and live with my relatives, who know me better,” she said.

The secretary of the Luvhaha traditional authority, Masuwa Mmbulaheni (35), said that the dilapidating building is not serving any purpose. “It is disheartening to see lavish and massive abandoned buildings like this and neighbours are worried about the bushes growing up around it, with no one to clean. It might be used as a hotspot for criminal activities. Our expectation was to have a primary school or perhaps a clinic,” he said.

The chairperson of Mushumo Ushavha Zwanda, Musandiwa Leonard Sidimela, however, seemed unperturbed and said that the project would continue once the SIU’s investigations were finalised. “Since 2019, our organisation and others in [the] NLC are under investigation,” he said, but refused to comment further. “We have agreed to invite you [to visit the site] once the project is completed. The investigation has been scheduled to end 30 November 2022,” he said.

When asked why the local community was not being kept informed about the developments, Sidimela said this was untrue and that key community members were “in the loop” as to what was happening. “As it stands, everyone in our community knows why the project is halted and that it will be completed when the investigations have been completed,” he said

Sidimela’s admission that he had already known in 2019 about the investigation is surprising. When he was contacted in January 2021 by Limpopo Mirror, he pretended to know little about alleged fraud involving the Lottery grant.  “Which irregularities?” he asked, adding that the reporter should “explain that fraud you are talking about to me in writing”.

NLC as transparent as a toilet window

The NLC’s spokesperson, Ndivhuho Mafela, also refused to provide any clarity about what will happen with this project.

“The NLC is cooperating with the SIU investigation and therefore refrain[s] from making public statements that require details of grants awarded between 2014 and 2020 as they are subject to the said probe,” he said.

The NLC, however, is battling with credibility issues. The SIU investigation revealed that the NLC knew about the fraud involved in the Maila village project but, instead of acting, tried to negotiate their way out of it.

The real losers are the residents of Maila village. When the project was started, an estimated 450 residents older than 64 years were living in Maila village. These pensioners were neither consulted, nor did they ask for an old-age home to be built. Had the money been divided among them, each could have received just over R60 000. That would have been enough for them to extend their houses, sink a borehole, build toilets or improve their lives in general.

What the community has now is a deserted, half-built structure that serves as a monument to corruption in the country.