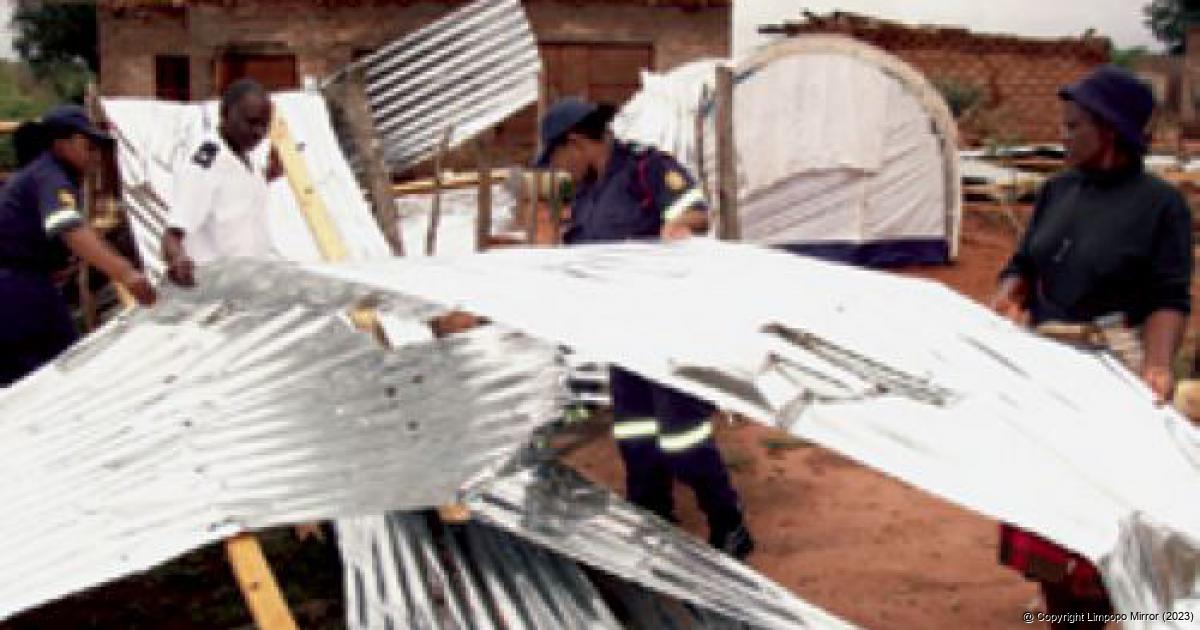 Ms Emily Mufamadi (right) is being assisted by emergency personnel to salvage mangled corrugated iron. In the background are her two houses, which had their roofs swept away by heavy winds and a white tent she got from the municipality stands at the entrance to her yard.

Heavy rains that fell in most parts of the province during the past few days came as a big relief to drought-stricken farmers, but to others it spelt doom as their houses were destroyed during heavy storms.

Communities in Mutale were not spared the wrath of Nature as scores of residents in the municipality were left homeless after an angry storm wreaked havoc and left a trail of destruction in its wake. Fortunately, no one was injured as everyone managed to run to safety.

The incident, which left more than 50 homes severely damaged, happened on Sunday evening. The worst affected village is Lukau-Tshishivhe, where many houses were left without roofs.

An eyewitness, Ms Emily Mufamadi, who had all her houses damaged, said the storm started at about seven in the evening. She said she was outside when the heavy storm started and she had to run to her room.

Mufamadi (53) of Tshishivhe outside Tshilamba in Mutale said she thought a tornado had touched down or lightning had struck her house. “I could not see properly as it was raining heavily and there was a hail storm, but I managed to enter my room and hid in a wardrobe,” said the shaking granny. She said while she was inside, the wardrobe kept moving up and down as if a strange and powerful force was carrying it.

The storm subsided after an hour and she went out, only to find that the roof of her two houses had been blown away. “I was very shocked and did not know what to do but after gaining strength, I decided to call the local emergency services, who came to my rescue,” she said.

Mufamadi said she would never forget the members who responded to her call and visited her house as she managed to salvage her possessions and they even gave a big canvass to cover her belongings.

“They did a wonderful job. Just imagine: they risked their lives in those heavy storms and thunder to make sure that I was safe. I will never forget them for the wonderful job they did for me,” she said.

She said the wardrobe would remain a treasured possession for having saved her life, thanks to God’s mercy.

Early that day she sent her mother to church and told her not to come back, but to sleep there. “I think it was a message from God that I should send her there. She would be dead or seriously injured by now as she could not run to safety.”

She said she was very thankful to the municipality for giving her a tent that she is using as temporary shelter, but was worried that they did not give her any food parcel even though they saw that she had nothing.

“I have nothing to eat, I was forced to go and ask for some mielie meal from my neighbours, but I am still hopeful they will do something for me,” she said

She said she was relaxing with her children at about eight in the evening when her roof was blown away. She ran to her relatives and luckily no one in the family was injured, but her belongings were badly damaged. She was worried that the local Mutale Municipality did not bother assisting her. “All they did was to bring that tent which they just left lying there and promised to come back. I am still waiting and they are not coming,” she said. She said they saw that all her mielie meal was wet, but they did not give her any food parcel.

The municipality’s spokesperson, Mr Thiathu Ravhura, said the situation was now under control, with the municipality having distributed tents and foodstuffs to the affected families.

“We heard about the incident and we immediately dispatched our disaster teams to assess the damage. We are making the necessary interventions. As a caring municipality, we do care about our community´s wellbeing and we will do everything in our power to assist them,” he said. He said a truck load of foodstuffs was heading for the affected villages and all would be catered for.